Super Covers Week continues. It's a question that has interested the creators for decades: What does the future hold in store for the Man of Steel? 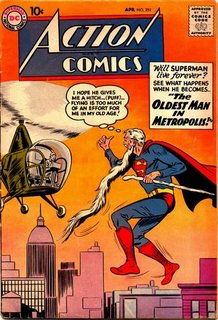 Will he get old but never die? That's how it appears on the cover of Action Comics #251. 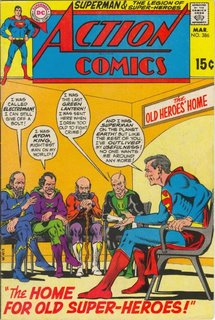 Perhaps he gets old and has to move into a home with other fading heroes, like in Action Comics #386. 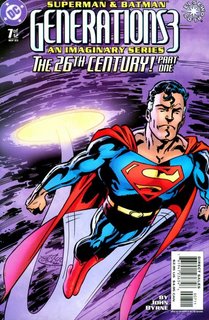 Or he gets older, just very slowly, as in John Byrne's Superman & Batman: Generations 3. 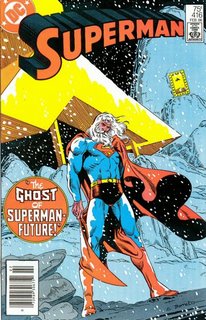 Or he just gets old and doesn't have the sense that Ma Kent gave him to come out of the cold, as in the darn cool cover to Superman #416 by Eduardo Barreto. 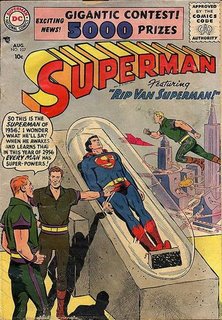 Or he goes the Rip Van Winkle route, like in Superman #107, and discovers that he's not so super anymore. 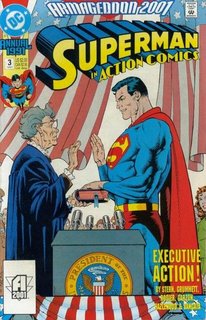 One doesn't have to go into the far future for a glimpse of Superman's life; how about the near future of... 2001? In Action Comics Annual #3, we find the Man of Steel becomes the President of Steel! (Ironically, in the regular comics, when 2001 rolled around it wasn't Superman but his arch enemy, Lex Luthor, who became President!) 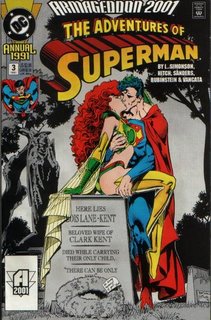 Alternately, Clark could become a widower. But really, making out with that skank Maxima on your wife's grave? Tacky, Kal-El, really tacky. 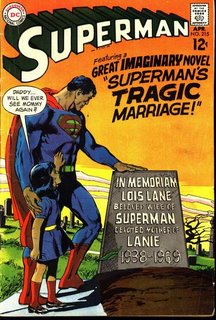 See, now that's better. (But what kind of name is Lanie for a kid?) 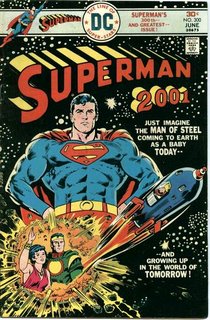 But who says it has to be our Superman in the future? What if Superman came to Earth today--in 1976? Then he'd be the Superman of the future in 2001! 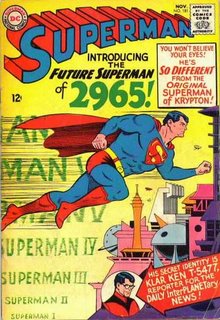 Even farther in the future, here's the Superman of 2965. He's 'so different' from our Man of Steel, what with the flying and the same powers and everything... 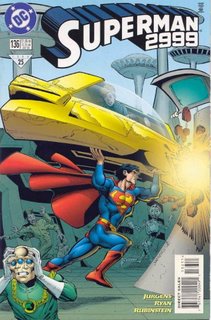 Now the Superman of 2999--there's a kid who understands tradition, as he recreates the cover to Action #1. 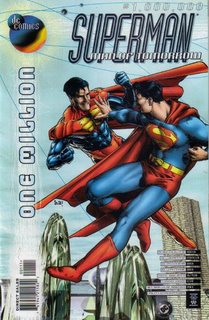 We end with the aptly named Superman: Man of Tomorrow #1000000, with Gene Ha giving us the Superman of today encountering his future self of the 853-rd century!


Thanks for journeying with us into the future. We'll be back tomorrow with more of Super Covers Week (and if you've been paying attention for the past couple of years, I bet you can guess what tomorrow's theme is...)
Posted by Dave Carter at 8:26 AM

There is an another Alternative: "SUPERMAN 2020" in the pages of Superman