Blogging About Not Blogging is a Sin

This is a heads-up that activity on this blog will be even lighter than usual for the next week or so.
Posted by Dave Carter at 12:16 PM 2 comments:

Email ThisBlogThis!Share to TwitterShare to FacebookShare to Pinterest
Labels: meta 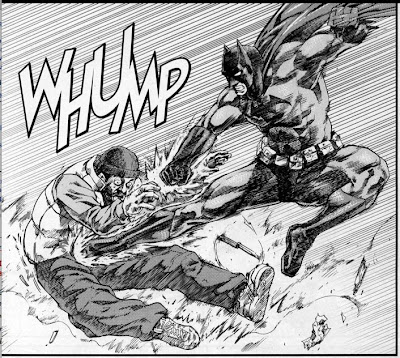 A classic? Whump!
Posted by Dave Carter at 7:47 PM No comments:

Three to Read for Wednesday, June 25

* Pitchfork: Poptimist #16: Within the Realm of a Dying Sun (via Dirk)

* The Hurting: Strange Comic Reviews of the Damned: Ganges #1

* Comics Worth Reading: Josei Manga in the US
Posted by Dave Carter at 10:22 AM No comments: 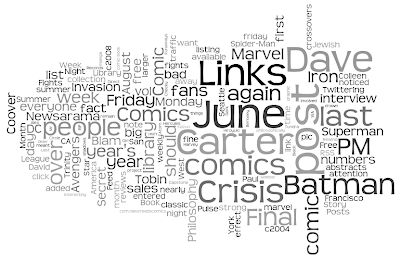 I took the text of the posts on the front page of this blog and used Wordle to create a word cloud. (click pic for larger)
Posted by Dave Carter at 1:20 PM 1 comment:

Email ThisBlogThis!Share to TwitterShare to FacebookShare to Pinterest
Labels: meta

Here's a list of the comics we added to our library collection last week:


This listing is available as an RSS Feed!
Posted by Dave Carter at 11:16 AM No comments:

Email ThisBlogThis!Share to TwitterShare to FacebookShare to Pinterest
Labels: library 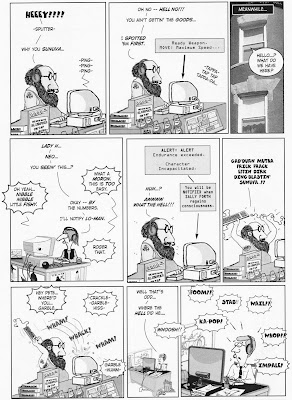 Disclaimer: obsessing over Diamond Sales Figures is bad for your health, bad for comics, and most likely contributes to global warming.

Lost in all the hubbub over the fact that Final Crisis #1 fell short of Secret Invasion #2 (though I'll get to that in a moment...) is that fact that the first 2 chapters of "Batman R.I.P" sold surprisingly well, right up at the 100,000 mark. Whatever disappointment DC might be feeling over Final Crisis numbers should be tempered a bit by this fact.

I'd chalk up the good sales on "Batman R.I.P." to the confluence of: Batman fans + Morrison fans + Tony Daniel fans + Big-ish Event fans + pre-Dark Knight movie excitement. "Batman R.I.P." could trn out to be this year's "Sinestro War"; maybe DC will learn that these minor-sized big-ish events will work for a better long-term strategy than the massive Crisis crossovers.

The other big sales surprise was the strong showing for Avengers/Invaders #1, proving that just about anything that Alex Ross is involved in is Direct Market gold.

As for the Final Crisis numbers: it's debuting at about 100,000 units less than Infinite Crisis did, which has to be disappointing. This is the first time that Marvel & DC have had their big event crossovers go head-to-head, so there was bound to be an effect. (We should also note that FC came out the last week of the month, so there are no re-order numbers included in the total, while SI came out the first week of the month so there is like a boost from re-orders there.)

It will be interesting to see the June figures: will Final Crisis take the same size drop that Secret Invasion did? Will Batman remain strong? How will Trinity do? (I think it was a mistake to start the weekly Trinity at the same time as Final Crisis; they each draw attention away from the other, and an eight-month break between weekly series was warranted.)
Posted by Dave Carter at 1:11 PM 3 comments:

If you've been paying attention to the blue box over at the top of the sidebar, you may have noticed that for the past six months or so it's been static. No more! I'm once again Twittering the comics I'm reading; bite-sized reviews no more than 140 characters. You can follow me at http://twitter.com/davereadscomics
Posted by Dave Carter at 7:43 AM No comments:

Free Comic Book Month 4 wrapped up a couple of weeks ago; general real life business has kept me from doing the wrap-up post until now, but here it is!

I had 47 entries this year, down just slightly from last year's 49. I have to admit that I'm always surprised that more people don't enter, especially since my daily readership is up about 50% from last year! Unlike previous years, I noticed nary a blip in a traffic increase--except for the day that Mike Sterling linked to me--but that's probably because the regular traffic level is so high these days that FCBM doesn't have as big an effect as it used to.

Once again everyone who entered received a free comic. Once again postage went up in the middle of May, though not nearly as bad as it did last year. I gave away 106 free comics this year, nearly on par with last year's 111.

Here's the traditional list of most popular comics that were given by entrants:

plus another 114 titles listed by one person each.

Thanks again to everyone who entered, and everyone who helped publicize this year's Free Comic Book Month. I'll most likely be back with more free comics in May 2009!
Posted by Dave Carter at 5:05 PM 3 comments:

Email ThisBlogThis!Share to TwitterShare to FacebookShare to Pinterest
Labels: fcbm

Friday Night Fights: Rally Vincent vs. Dudes in a Van 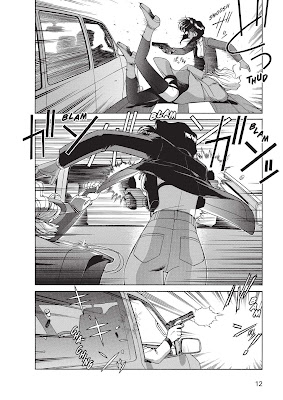 A classic? Blam! Blam! Blam!
Posted by Dave Carter at 7:35 PM No comments:

The Comics I'm Most Looking Forward to This Summer 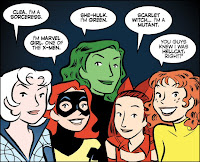 The comic I'm most looking forward to this summer is the King-Size Spider-Man Summer Special, by the Banana Sunday team of Paul Tobin & Colleen Coover. The story will feature May Jane Watson and a host of Marvel Women—including Marvel Girl, Clea, She-Hulk, Enchantress, Scarlet Witch, Patsy Walker, and Millie the Model—all drawn by YACB fave artist Colleen Coover!

Jennifer M. Contino has an interview with Tobin about the comic over at Newsarama The Pulse.

Circle August 6 on your calendars, and let your Friendly Local Comic Shop owner know that you want the bestest comic of the summer!*

EDIT: The Tobin interview, as you no doubt figured out when clicking the link, is at The Pulse, not Newsarama. Apologies to JenC and the fine folks at Comicon.Com. I got confused because Newsarama has this fine interview with Coover about the same project which I also meant to link to.
Posted by Dave Carter at 12:33 PM 3 comments: 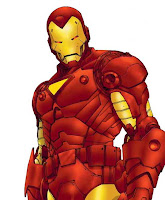 So you want to combine your love of Marvel Super-Heroes with your degree in philosophy? Now you can in the upcoming book in The Blackwell Philosophy and Pop Culture Series: Iron Man and Philosophy. The call for abstracts is here. "Abstracts and subsequent essays should be philosophically substantial but accessible, written to engage the intelligent lay reader." Hurry; abstracts are due by August 15!
Posted by Dave Carter at 6:42 PM 1 comment:

Here's a list of the comics we added to our library collection last week:

Hajdu, David. The ten-cent plague : the great comic-book scare and how it changed America / New York : Farrar, Straus and Giroux, 2008.


This listing is available as an RSS Feed!
Posted by Dave Carter at 7:30 AM No comments:

Email ThisBlogThis!Share to TwitterShare to FacebookShare to Pinterest
Labels: library 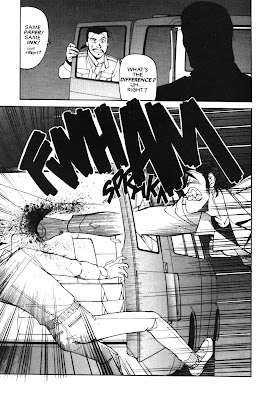 A classic? FWHAM!
Posted by Dave Carter at 7:21 PM No comments:

The Power of Bone

Kids like Bone. This is not surprising, of course, but still very true.

Background: A few weekends ago I was back home visiting my parents. I had along with me the massive one volume Bone collection, and was re-reading it because it was our book discussion group book for May. My nephew, age 8, was visiting and saw me reading the book. Up until a year ago my nephew was what would be described as a 'reluctant reader', but in the past few months he's become much more engaged with reading for pleasure. Recently he has been borrowing (and devouring) my dad's Calvin & Hobbes collections, so he's getting into comics as well. My nephew became quite interested in the huge Bone collection, and wanted me to read it to him. So we sat on he big recliner and I started reading it out loud to him. He was quite engaged with it, and after we made it through the first three chapters he began reading it on his own. He was disappointed that I had to take it back to Ann Arbor with me, but I needed to finish it in time for that Tuesday's book club meeting.

I considered loaning my copy to him when I was done, but I have one of the early copies of the one-volume edition and the pages are falling out. So I hopped onto Amazon and ordered a copy to be shipped to my nephew directly. It arrived last Friday, and he completely finished all 1300+ pages over the following 48 hours. Simply put, my nephew loves Bone! (My sister asked me if I know of any other 1000 page comic books that could keep him entertained!)
Posted by Dave Carter at 12:49 PM 3 comments:

Email ThisBlogThis!Share to TwitterShare to FacebookShare to Pinterest
Labels: kids

One of my fave mini-comics creators, Cathy Leamy, just dropped a line that she'll have a new issue of Geraniums & Bacon—issue #5—at MoCCA this weekend. If you're there, look for it! If like me you won't be there, she should soon have it available for sale at her Website.

(I previously reviewed the first two issues of G&B.)
Posted by Dave Carter at 10:16 PM No comments:

I started up a new blog today:

Eaten by a Grue is a blog devoted to video games in libraries.

Why am I blogging on such a topic? The introductory post may give you a clue...

Don't worry, I'll continue to blog about comics here at YACB. (I may take a short break though to recuperate after Free Comic Book Month...)
Posted by Dave Carter at 6:05 PM No comments: