Posted by Dave Carter at 2:12 PM No comments: 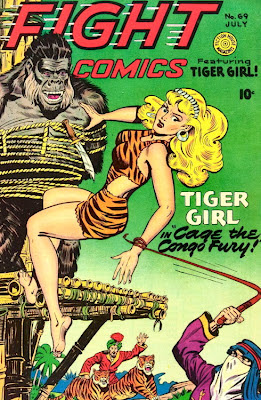 (Standard disclaimer about tied-up gorillas not really being monkeys applies.)

Image courtesy of Simple Dreams. Click on the image for a larger version.
Posted by Dave Carter at 8:45 AM No comments:

Posted by Dave Carter at 7:12 AM No comments: 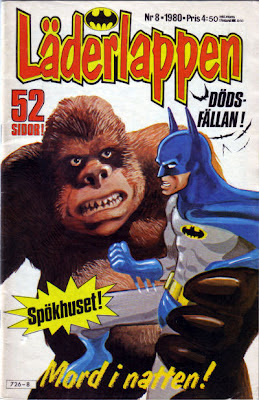 (Standard disclaimer about gorillas not really being monkeys applies.)

Image courtesy of the GCD. Click on the image for a larger version.
Posted by Dave Carter at 4:27 PM No comments: 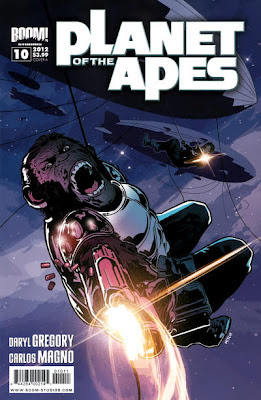 Image courtesy of Comic Book Covers. Click on the image for a larger version.
Posted by Dave Carter at 8:10 AM No comments: 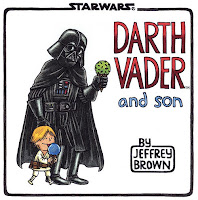 Writer and artist Lea Hernandez has been involved in both print and online comics for over twenty-five years. In the print world she is best known for her work on the graphic novels Cathedral Child, Clockwork Angels, Rumble Girls, and Killer Princesses (with Gail Simone). In the world of Webcomics she has published on the site Modern Tales and was the original editor of Girlamatic.


Lea's latest project is The Garlicks, an all-ages story about a vampire family that will be published online and then collected into a print edition. Lea is seeking funding for the project via Kickstarter. She took time out of her busy schedule to answer my questions over email about her new venture:

YACB: Prior to The Garlicks you've written and drawn several other comic projects. What attracts you to comics as a medium for telling stories?

LH: I like to write and draw. Telling stories any other way doesn't satisfy me.


YACB: When you write and draw a comic, what is your creative process like? Do you first produce a written script or an outline? Or do you work from rough notes and/or thumbnails?

LH: It depends. In the case of The Garlicks, it started with a letter I wrote to a friend after I mis-read the name "Gorelick" (Go-REL-ick) as GORE lick. I thought, that's a wonderfully demented name for a vampire, and immediately knew I didn't want to write horror (which Gore Lick demands), I started playing with the name. A short Google search later confirmed that somehow there had never been vampire named The Garlicks. Then I poured out what I was thinking to the friend: the names, motivations and first story were right there.


I write a full script: page layout, panel descriptions, dialogue. I've tried other ways, but that's the only one that works for me. Since The Garlicks is also episodic, I keep a file of story ideas to draw on.
After scripting, I do rough layouts in pencil on paper, then import them into Photoshop, improve them (usually) and then tighten the pencils. After that, I either print them out and use a light table to finish the art by hand, or continue to ink and paint digitally. (The vid for my Kickstarter shows this process.)

LH: My good friend Adam Warren (Empowered) kept telling me my color work was stronger than my b&w/limited palette/pencils, going back to my story for Comic Book Tattoo, until I took the plunge.

He was right, and I've had so much pleasure in working in color. 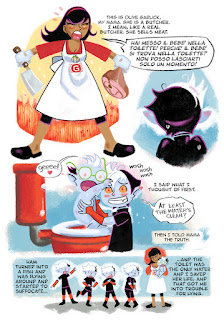 YACB: I've noticed a distinct lack of panel borders in the pages for The Garlicks. Was this a conscious decision on your part, or something that happened organically?

LH: I wanted the art to have the feeling of a sketchbook/diary, and went back to some of my previous work that I got the best response to, A comic that I do every few years, Near-Life Experience, which has diary-like art with a freer page structure. It's also the structure that makes me happiest. I suppose that comes through!


YACB: Why did you decide to make your protagonist, Pandora, an aspiring graphic novelist?

LH: I wanted to do a comic in a style that was less grid, more open, which led me to decide it should be someone's notebooks. So, Pandora got the job of being a graphic novelist. I also want to put this aspiration to write and draw stories in the minds of The Garlicks intended audience.


YACB: Why vampires? How do you feel that vampires work as a vehicle for telling stories in general and The Garlicks in particular?

LH: I was ambiguous about vampires. I've liked books that happened to have vampires in them, but I wouldn't choose a read because it had vampires. I didn't tell myself, "No vampires EVER!" I couldn't let The Garlicks idea go once it had me, saturated sub-genre or not. As for The Garlicks, it's useful for showing sibling rivalry and bigotry. And, I like to think, will be a take on vampires that's new. Or new-ish.


YACB: You've stated that you intend for The Garlicks to be targeted towards girls (though any comics reader should be able to enjoy it). What led you to decide to target that demographic with this comic?

LH: I make comics I wanted to read as a kid/teenager. Writing for girls (which is a habit, rather than a targeting move) has the happy side effect of being a small remedy to the problem that there are flat-out not enough comics for girls. I always hope for crossover appeal (and I get it), but I create for girls first.


YACB: What are the elements of The Garlicks that you feel make it 'for girls'? (In both a 'for females' and 'for younger readers' sense.)

LH: A lead who is a girl, for one. She has a relatable problem a lot of girls who are older siblings have: riding herd on the younger ones.

Pandora is cute, but not sexualized, so a girl/woman reading The Garlicks doesn't have to have that feeling of, "You said this was for me, but there's the thing that shows me you didn't have the confidence to not throw in "something for the guys."

There's something wonderful about knowing, as a girl/woman, that something is for you and will always be for you first. 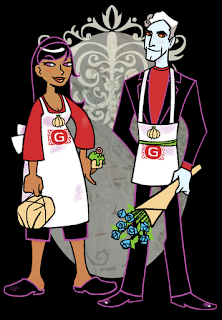 YACB: Are there any creators and/or works (either in comics or other media) that you consider to be inspirations for The Garlicks?

LH: Brianne Drouhard, Brittney Lee, Steven Silver, Lauren Faust, Mike Rohde. The first three are concept artists and character designers with lovely senses on color, weight and line. They're fantastic. The fourth, Lauren Faust, I was a fan of back to Cats Don't Dance, a criminally underrated animated movie. Her take on My Little Pony showed that "girly" had appeal across gender and age, but could remain true to its audience. Mike Rohde invented a method of visual note taking called Sketchnotes. Being inspired by his work after a long, depressing dry spell helped give me a new direction in my comics.


YACB: How have your previous experiences with Webcomics informed how you are producing The Garlicks? Why did you decide to use Kickstarter as a method of funding this latest project?

LH: Webcomics are a proven model in that they are the most frictionless way to get a story to an audience. There's also instant gratification for reader and creator. There's no working in a vacuum, then sending it off, then waiting for it to hit shelves. That can take three or more years, whereas a webcomic can start as soon as a creator has drawn it. No submissions, no delays, no rejection, no waiting a year or two AFTER completion to see a physical book.

I decided to use Kickstarter for two reasons. One: I need a job while I look for regular employment, so I made one. Two: people have responded very well to The Garlicks, and I have had no time to add to the webcomic because I've been trying to cram it in the spaces between commissions, school, job hunting. A funded Kickstarter solves both problems very well for me and my fans.


YACB: Is there anything else that you'd like to tell readers about The Garlicks? Any other projects that you are working on? (Plug away!)

LH: That I won't get to that $40,000 Kickstarter finish line without a LOT of help in the form of backers and supporters! It's not just important to me (but getting a year to work on my next book without worrying about eating or bills is REALLY important), it's important to keep showing that 1) girls DO want comics and 2) everyone wants GOOD comics.

I'm also working on a great graphic novel by Josh Hechinger called The Moon is Mine, about a candy factory on the moon and the giant robot battle to control it. Josh is a talented writer, insanely so, so I'm giving it my best, albeit slowly!

Other than that, not much, because running a Kickstarter takes a LOT of time. I'm going to be writing an article about Kickstarting with Dani O'Brien, writer of All New Issues, about putting together and running a campaign. I'm enjoying myself, because I love challenging projects, but it's also an emotional roller coaster and a lot of stress. Fun, but very very hard. 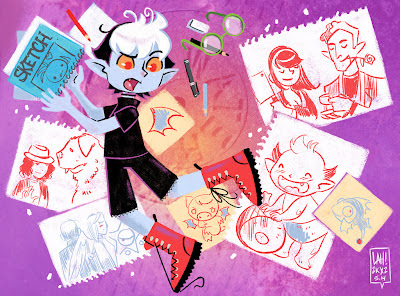 Thanks again to Lea for taking the time to answer my questions. You can follow Lea on Twitter @theDivaLea ; see images from The Garlicks and other projects on Flickr at http://www.flickr.com/photos/divalea/ (from where images on this post are taken); or read her LiveJournal Dangerous Beauty at http://divalea.livejournal.com/ . The Kickstarter campaign for The Garlicks is at http://www.kickstarter.com/projects/divalea/the-garlicks-pandora-orange-fail-vampire


Commentary:
Posted by Dave Carter at 9:12 AM No comments: