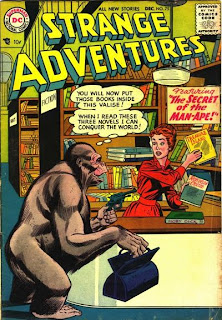 Finishing off our salute to National Library Week, we have what is perhaps the greatest comic book cover ever. From 1956, Gil Kane & Bernard Sachs draw the cover for Otto Binder's story "Secret of the Man-Ape" in Strange Adventures #75. Who is this ape? Why does he need those three books? And doesn't he know that the reference librarian will help him fulfill his information needs without having to brandish a gun?

In fact, this cover is so great that it was recreated by Nick Cardy in 1973 for the cover of From Beyond the Unknown #23, wherein the story was reprinted.

Image is courtesy of the GCD. Click on the image for a larger version.
Posted by Dave Carter at 8:30 AM