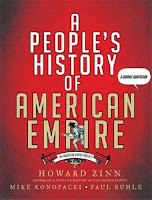 This graphic historical narrative is an adaptation of sorts of ideas from Zinn's classic A People's History of the United States. Those familiar with Zinn's works will not be surprised to know that American History in this work is viewed through the lenses of class and race conflict domestically and imperialism internationally.

Any historical graphic narrative labors in the shadows of the work of Larry Gonick. Unfortunately, Zinn, Konopacki & Buhle fall short in this comparison. Gonick is an accomplished cartoonist and entertaining storyteller who makes ample use of (often irreverent) humor while presenting his sometimes out-of-the-mainstream histories; A People's History of American Empire (APHoAE) features adequate but by no means exemplary cartooning and is a consitantly serious and humorless affair.

As Gonick does with his comics, Zinn is used as a narrative character within APHoAE--a technique that force comparisons with superior works. However, Zinn also appears in some chapters as a viewpoint character. This serves to muddy the waters as to whether APHoAE is meant to be a historical memoir or an objective view of history.

Another curious decision is to make liberal use of historical photographs within the work, often in place of regular drawn panels. There seems to be little rhyme or reason for what has been chosen to be drawn and what is represented by a photograph. Also, the reproduction of most of the photographs is quite poor and tends to downgrade the visual quality of the book.* Konopacki is a good enough artist that these photograph panels could have been drawn, and doing so would have given the work better visual cohesion.

Whether or not one agrees with Zinn's political and/or historical views, A People's History of American Empire is a less-than-compelling work of graphic narrative.

* (This review is based on an advance reading copy provided by the publisher. As an uncorrected proof, there is a statement that reads 'some illustrations are not final,' which seems like a very odd thing to do for review copies of a comic-format work.)
Posted by Dave Carter at 4:05 PM

Email ThisBlogThis!Share to TwitterShare to FacebookShare to Pinterest
Labels: reviews