Let's see, I'm probably going to forget something... Here are my twenty favorite comics from the past year, in no particular order:

Yotsuba&! vols. 6-7 - Nothing gives me greater joy than a new volume of Yotsuba&!, and in 2009 we got two, thanks to Yen Press's resurrection of the title. I actually preferred ADV's less-literal translations, and I'm not a fan of the mess of fonts that Yen is using, but those are minor quibbles. When I was telling people that the new volume 6 was out, I simply said "Yotsuba gets a bike"; those who were familiar with the comic would instantly light up, knowing that Azuma is able to wring much hilarity out of such simple everyday premises.

Batman & Robin #1-3 - Grant Morrison is a good comic writer. Frank Quitely is a good comic artist. But put the two together, and you always get something greater than the sum of its parts. They kick off the era of the new Dick Grayson Batman with a three-part story that is full of action, plot and character. Every time Quitely draws a comic, he shows me something new.

Detective Comics #854-860: "Batwoman" - Like Morrison & Quitely, Greg Rucka & J.H. Williams III make for a great team. Their new Batwoman headlining feature in 'Tec is a visual tour de force, but always in service to the story. Most of today's comics waste their high production values on mediocrity, but here the bold colors jump off the shiny pages and the contrasts between the chaotic action and the sedate in-between sections work in ways to stretch the narrative.

3 Story - Matt Kindt's OGN about a man who never stops growing. Kindt takes a fantastic narrative and makes it compellingly ordinary. Craig Pressgang is a character both compelling and enigmatic, as his story is told from the viewpoints of three women in his life.

Ganges #3 - Kevin Huizenga's ode to insomnia. If 3 Stories makes the fantastic ordinary, Kindt pulls off the opposite with his Glenn Ganges stories, making the ordinary compelling.

Incredible Hercules - The perfect example of how to do a myth-based super-hero comic. This past year saw Herc and his pal Amadeus Cho journey to the afterlife, have a falling out, and then come together to take on the Olympians outpost on Earth. Along the way, Hercules impersonates Thor. Fun from beginning to end.

The Muppet Show - There may not be a better pairing of artist & commercial subject matter than Roger Langridge and the Muppet Show. Langridge distills the essence of what makes the Muppets work and filters it through his own sensibilities. With so many mediocre licensed comics out there, Langridge & Boom! show that it can be done right.

Jonah Hex #50 - An epic western tale in one (oversized) issue, with art by the always reliable Darwyn Cooke. Brutal, violent and heartbreaking. In other words, everything you want in a Jonah Hex comic.

Marvel Adventures Spider-Man #53-58 - Paul Tobin's reboot of the Marvel Adventures line finds us with a Peter Parker in high school, and a perfect cast of supporting characters to round things out. Every story is done-in-one, but with enough continuing subplots to keep things going from issue to issue. It looks like Marvel is canceling this soon, which is a shame.

Batman: The Brave and the Bold #4 - Mainly the first two pages, which may be the best comics I've read all year. Batman teams up with Sugar & Spike to take on Felix Faust. Really. It's awesome. Thank you, Matt Wayne & Andy Suriano!

Beasts of Burden #1-4 - Evan Dorkin & Jill Thompson take their stories of animals who protect their neighborhood to their own series. Thompson's painted artwork is perfect. The ending of issue #2 is one of the saddest, most brutally heartbreaking things I've read in a long while.

Captain Britain and MI13 #10-15: "Vampire State" - DRACULA shoots VAMPIRES at EARTH from a CANNON on the FReAKIN' MOON! Sometimes I just love comics!

Love & Capes #9-12 - Thom Zahler end the first 'season' of his romantic comedy super-hero story with the lead-up to Mark & Abby's wedding. Both the drama and the gags work well, and Zahler's art keeps things zipping along. 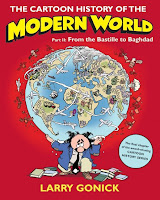 The Cartoon History of the Modern World pt 2 - Larry Gonick finishes his 30-years-in-the-making History of the Universe, and it's worth the wait. Gonick is the measuring stick against which all other non-fiction comics should be measured.

Johnny Cash: I See a Darkness - Reinhard Kleist's German OGN about the original Man in Black is translated into English. Kleist captures the essense of Cash's life with his appropriately moody artwork, and does an excellent job interweaving some of Cash's songs into the narrative as visual reveries. A good example of how to do a comic book biography.

The Wonderful Wizard of Oz - Did we really need another comic book adaptation of Baum's Oz? Yes, when done with great skill by Eric Shanower & Skottie Young. By giving the story proper room to breathe, Shanower is able to bring to the front parts of the story that are usually glossed over or missing from other adaptations (I'm looking at you, well-loved MGM movie!) And rarely have the denizens of Oz looked better than when drawn by Young.

"Supergirl" in Wednesday Comics - In a comic full of all-star talent, Jimmy Palmiotti & Amanda Conner more than hold their own. Krypto & Streaky go nuts, and Supergirl must get them under control. Out-cutes just about anything else published this year.

Beanworld Book 3: Remember Here When You Are There! - Larry Marder finishes the 'spring' cycle of Beanworld in an all-new hardcover. A great reminder of just how far the simple comic format can go. Funny how I'd never before caught on to the Gnostic undertones of the Beanworld narrative...


I'm sure there are plenty of good comics published last year that I sadly haven't yet got around to reading, so don't fret if your favorites aren't listed here.

thanks for the kind words dave!