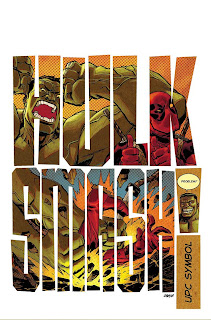 Marvel finally released their June 2001 solicitations today. What follows are random thoughts that occur as I read through:


The Fear Itself event continues. The main book is $4 for 32 pages; weren't the first two issues 40 pages?

I have little interest in the multitude of spin-off books. Youth in Revolt is by creators I know and generally like (McKeever & Norton) and is $3, so I'll probably pick that up. Fearsome Four has Man-Thing and art by Michael Kaluta (and also $3), so I'll likely get that as well.

Two issues of Thunderbolts, both Fear Itself tie-ins, with tag team writers and artists. Probably skipable, but this is one of those instances where having a long run on a title will keep me buying though short blips like this.

A new Dark Tower series by Peter David & Michael Lark. I have zero interest in the property, but that's a creative team that might get me to pick it up, except for the $4 price tag.

Apparently after months of build up this is the month that they're finally killing Ultimate Spider-Man. Because that whole Ultimatum mess did such great things for the Ultimate Line.

There are a couple of instances where Marvel are collecting three recent issues of Avengers titles for just $5. I'm not sure on the publishing strategy here.

The ill-conceived 'point one' initiative hits a title I actually follow (Avengers Academy). I'd be just as happy buying an issue #15 as I would #14.1. Also, this seems like a good way to make sure that customers who don't aggressively follow the comic news sites will not purchase an issue of a title.

Captain America Corps? Really? It's like they're just trying to come up with things to flood the market that just won't sell (no matter how good it may actually be).

(Marvel Adventures) Super Heroes has been a reprint book for the past few months. The latest issue is by the regular writer (the very good Paul Tobin) but no indication as to whether this is a new story or not.

As has been noted elsewhere, Andi Watson's long-completed-but-never-published 15 Love is finally seeing the light of day. I'll be in line, but wouldn't this work better as an OGN targeted at the bookstore market?

There's a new WWII-set All-Winners Squad limited series written by Paul Jenkins, whose super-hero stuff has always been hit-or-miss with me. So I'll like wait and see if it is well-received, and pick it up in trade if it is.

No such worries with Jenkins' other new limited series, Ka-Zar: I'm not a fan of artist Pascal Alixe, and it's $4 for 32 pages to boot.

Even dumber than kicking off a new series with a #0 issue? Kicking it off with a #0.1 issue, as is the case with Ghost Rider. How would starting a new series off with a regular ol' #1 issue not be considered a jumping-on point in and of itself?

Mystery Men #1 & 2: CLASSIFIED! By a writer I'm unfamiliar with? PASS!

Two different Marvel Zombies mini-series running at the same time? Do they think it is still 2006?

I care not one whit for Deadpool, but I'll admit that the Dave Johnson cover for #38 is pretty awesome.

Looks like just abut every X-Men title gets two issues this month. Because what we really need are twice as many X-Men comics.

Supreme Power returns with a four issue mini, just about at the point where most have forgotten about it. And the $4 price tag won't help matters either, and make it just that easy a pass for most I suspect.

We're drowning is Captain America and Thor collections. X-Men too. Think maybe there's a movie or two coming this summer?
Posted by Dave Carter at 3:17 PM