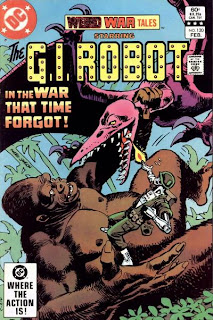 G.I. Robot teams up with a giant gorillas to fight a pink pterodactyl on the cover of Weird War Tales #120 (1983) by Ross Andru and Klaus Janson.

Image courtesy of the GCD. Click on the image for a larger version.
Posted by Dave Carter at 5:20 PM