Success Metrics for the new DCU 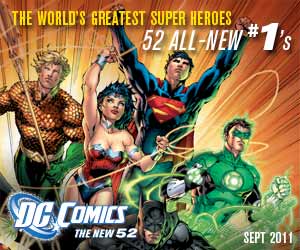 Tomorrow the era of the new DC Universe (DCnU) begins with the release of Justice League #1. The "New 52" (as DC are calling it) represents a bold and, as DC have more-or-less admitted, somewhat desperate publishing strategy: 52 new (or new-ish) monthly titles starting with #1 issues, available day-and-date as print and digital versions. They are hoping to attract new readers to DC Comics, or at least capture back a good number of lapsed readers. So how might the success of the DCnU be judged? Here are some possibilities:

(Note that I am considering success from the publisher's perspective in this post. For we readers, success will and should be determined by quality of the comics themselves.)

Profit. Actually, the chance of making a profit from the venture is slim at best. But that's okay, as profit isn't the main motivator for DC anyway. Oh sure they'd be happy if all of their titles were making money, but I suspect they'll be perfectly happy with simply losing less money overall, especially if some of the other metrics are met.

Sales. Obviously, increasing sales is one of DC's main goals. This could be measured in many ways, e.g. by increase in individual titles that are being relaunched, or the number of the 52 titles over a certain threshold. But as this is a complete line-wide revamp, perhaps the most salient number to look at will be the average sales of the entire DCU line. Courtesy of The Beat, here's a table of the line-wide averages for the DCU as of this past June's sales figures:


Notice a trend? Even the two-year comparison is bad, and the five-year number is atrocious. Now part of that five-year decline can be attributed to DC pumping out even more low-selling titles; one sure way of raising the line-wide average would be to cut out all of the low-selling titles and publish fewer comics. But since DC seem determined to publish 52 monthly titles (or more, with additional mini-series coming starting in October...), getting the line-wide average as it stands a year from now up to at least where it was in 2009 would be considered a win.

Market Share. Despite DC's claims to the contrary, I believe that a market share win against their cross-town rivals at Marvel will be considered a victory. Market share is one of the things you can trumpet even when you are not actually making money. And if market share wasn't a top concern, there would be no reason to be pumping out so many new comics every month, most of which are losing money and whose only purpose seems to be taking retail shelf space away from your competitors. It seems highly likely that DC will see a market share win in September; if they can keep that going for a majority of the coming twelve months—or at least keep it more competitive than it has been in the recent past—they will consider the New 52 a success.

Digital Sales. With the day-and-date availability of digital versions of all of the DCnU titles, DC is obviously hoping to pick up new readers who are willing to pay for online comics. To date, digital sales on most comics have been a small fraction of the print sales, due to: 1) inconsistent availability; 2) the gawdawful hard-to-use old comiXology app (a new revised version was released last week, and based on my initial few minutes of testing it appears to be vastly improved); and 3) competition from cost- and DRM-free illegal scans. With all of the DCnU titles now available online on a consistent basis, they should see an upswing in the number of people buying online. The question is how big that upswing will be? I don't imagine that the number of people who are willing to pay the parity-with-print $2.99 cost for the digital comics in their first month of release will be huge; but there may be enough people willing to cough-up the month-old $1.99 price for titles to make up for any deficiencies in the sales of print.

Visibility. The real business of DC Comics, as far as their corporate overlords are concerned, is in generating characters and other intellectual property that can be exploited for profit in other media. Not just blockbuster movies like The Dark Knight, but in video games, television, licensed apparel, etc. So every time a story about the DCnU hits the comic press, or especially the mainstream press, it is a win for DC. Even if all of the other metrics we've discussed are moderate at best, the amount of publicity already generated is likely being viewed as a success.

Long Term. It will be tempting to look at the first-month sales figures for the DCnU titles and make a snap judgment about the New 52's success. But the real measure won't be apparent until at least a year, or even better two years, down the line. How many of the New 52 are still being published in 2013? Will the "cancellation floor" for the line as a whole rise? Can titles maintain their initial sales boost? Will DC be able to successfully launch new comics and properties? Answers to these kinds of questions will ultimately tell us if this big experiment has really succeeded.
Posted by Dave Carter at 1:49 PM

Actually, if you crunch the numbers, DC is going to be producing fewer books come September. It's not a drastic reduction, but September's showing a drop of about 25 books in comparison to August.

52 sounds like a big number, but it really isn't.

True, but then they're adding something like six more mini-series in October, and more in November. They'll be back up to regular before you know it.

If the 52 is the death Kneel for the DCU, maybe a comic book will is called for?

When you have the time, this may be of interest - http://www.comicbookandmoviereviews.com/2011/08/in-retrospect-comic-book-wills.htm