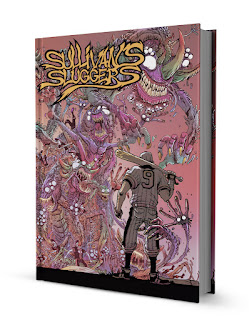 Writer Mark Andrew Smith has been active in the comics industry for several years now. He is the co-creator and editor of the Eisner Award-winning Popgun Comics anthology, and the writer of several comics series (published mostly though Image Comics) including Amazing Joy Buzzards (art by Dan Hipp), The New Brighton Archeological Society (art by Matthew Weldon), and Gladstone's School for World Conquerors (art by Armand Villavert).

Mark's latest comic is Sullivan's Sluggers, a baseball/horror original graphic novel drawn by James Stokoe, the publication of which will be funded via Kickstarter. Mark took time out of his busy schedule to answer my questions over email about his new venture:


YACB: Prior to Sullivan's you've written several other comic projects. What attracts you to comics as a medium for telling stories?

MAS: I really love the blending of words and images, and the pacing of comic books.  I’ve loved reading comic books ever since I was a kid, and they’re something I love to create.  For me there is an energy to comic books that only comics can capture through the art and words on the page.

MAS: As a kid I was a huge Spider-Man fan, and I also read the Mirage run of TMNT that I was a huge fan of.  I think TMNT was very formative for me.  After the crash in the 90s I stopped reading comics but I was still interested in making them.  At University my faculty adviser told me about Understanding Comics and a light just clicked in my head.  I went to the comic shop and caught up with what I’d missed over the past 10 years.  It was great and like school for me to read that much material at once.


YACB: When you returned to comics after a 10 year absence, what were the comics that grabbed your attention? How did they appeal to you as an adult reader?

MAS: It was the indy comics that grabbed my attention and especially the work of Jim Mahfood, Scott Morse, Paul Pope, Mike Mignola, Frank Miller, and Mike Allred that got me interested again  With some books they had such a minimal style but the stories they told packed a big punch and that was really interesting to me.  I kind of discovered that there was the possibility of telling a moving and impactful story like Hamlet but with stick figure art, and if you expressed it enough through the art it would still resonate with the reader.  I came in finding indy comics and new characters that were interesting.  I think Madman is my favorite character ever.


YACB: While there's a long history of the horror genre in comics, the list of baseball comics is much shorter. What led you to combine the two in Sullivan's Sluggers?

MAS: I’ve always been a fan of baseball, and baseball movies growing up.  I’ve also been a fan of fun splatter horror films too.  I think the two make for a great combination in seeing a team of baseball players go through horrible conditions and using their skills as athletes to survive.


YACB: You mentioned baseball films and splatter horror films as inspirations for Sullivan's. Do you consider your comics work to be cinematic? How do you feel that movies inform your comics work in general and Sullivan's Sluggers in particular?


MAS: I think my comic work is cinematic at times for pacing, and letting the images tell the story.  The downside of this is that it gets massive in length and projects grow and grow.  I think with most of my work this was the case and with Sullivan’s.  With something like Gladstone’s School for World Conquerors it’s cinematic in that it’s epic with huge world building and action.  I went to film school at UC Santa Barbara and films and film theory definitely help to craft my work.

YACB: What is it about baseball that you feel makes it a good setting for stories in general and for Sullivan's in particular?

MAS: What I love about baseball is that it's a great team dynamic with so many different personalities on a team that all want different things.  Actually, keeping track of an entire baseball team in the comic was a challenge to do, and I had to check the character roster a lot.  With baseball there is an epic history to baseball spanning well over a hundred years and also potential for ghosts and monsters.


YACB: What attracted you to James Stokoe as an artistic collaborator? What strengths does he bring to Sullivan's Sluggers?

MAS: I think I was the first person to know about James Stokoe, and we published Orc Stain before anyone else in the Popgun Anthologies.  James Stokoe is in my opinion the Jimmy Hendrix of comics, and his art is fantastic.  He’s able to convey great settings, great action, and great character personality in his work, in telling the story with me through his art.


YACB: What is your collaboration process like with James? Do you give him a full script or a plot to work from? At what point in the development process of Sullivan's did he come on board?

MAS: I give James a full script but it’s more by action beat by panel and it’s definitely not an Alan Moore style script describing everything in detail.  It does what I want and gets the results that I want from James.  I had the first 32 pages written and the characters all picked out.  He just started drawing them and I don’t think he even did concepts for them but I gave a lot of references and descriptions about the characters. 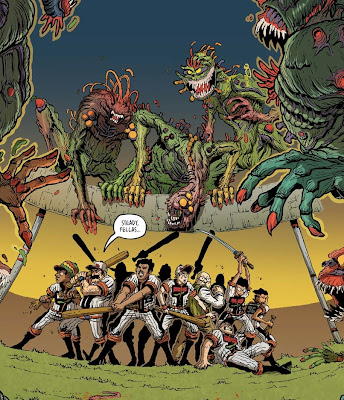 YACB: One thing that struck me on looking through the preview pages for Sullivan's is how colorful it is, compared to the dreary color palate that one often sees applied in horror comics. Did James do the color work as well? Whose idea was it to make the comic so full of color?


MAS: Rodrigo Aviles is our colorist and I knew a more colorful book would make the project look better and so I picked him.  I think James comes  from the same coloring school as well and if you see his other work, the coloring is like bubble gum.


YACB: Why did you decide to use Kickstarter as a means of funding the hardcover edition of Sullivan's Sluggers?

MAS: For Sullivan’s Sluggers, I wanted a book just for me that I’d be proud of having on my bookshelf.  I wanted to do a beautiful edition of the book that made it collectable.  I also wanted to test Kickstarter out with Sullivan’s and see if doing something exclusive on Kickstarter would better connect me with my audience and rally their support.  It’s risky but also will be very rewarding and I’m glad I’m taking the Kickstarter risk.


YACB: Will Sullivan's Sluggers be available outside of the Kickstarter campaign? In what format(s)?

MAS: I’m still debating it right now but I don’t have the answer.  I think it would do well in single issues at comic shops, so we’ll see if that’s an option in the future.  With Sullivan’s I’ll probably pace it out over a longer duration of time for the releases if there are different formats because it is important to sell the hardcover and recouping and making money on Sullivan's is important to me so that I can get material out faster in the future.


YACB: What other projects do you currently have in the pipeline? (Plug away!)

MAS: Right now I'm working on series 2 of Gladstone's School for World Conquerors and also the New Brighton Archeological Society and they should be out this year.  We're coloring away at the moment on those.


YACB: Is there anything else that you'd like people to know about Sullivan's Sluggers?

MAS: Sullivan's Sluggers is awesome and be sure buy one (or three)!


My thanks again to Mark for taking the time to answer my questions. You can follow Mark on Twitter at @MarkAndrewSmith . The Kickstarter campaign for Sullivan's Sluggers is at http://www.kickstarter.com/projects/1940696606/94552881?token=c5aa40a6
Posted by Dave Carter at 11:47 AM

Email ThisBlogThis!Share to TwitterShare to FacebookShare to Pinterest
Labels: interview