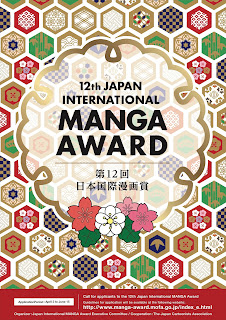 The Consulate General of Japan have announced that they are accepting entries for the 12th Japan International Manga Award. Here's the press release:

Greetings from the Consulate General of Japan in Detroit.

We are pleased to announce that the Ministry of Foreign Affairs and the Japan Foundation have launched the twelfth annual Japan International #MANGA Award competition and have begun accepting entries.

The Japan International MANGA Award was established in May 2007 upon the initiative of then Minister for Foreign Affairs, Mr. Taro Aso, with the aim of recognizing manga creators who contribute to the spread of manga culture overseas and international cultural exchanges through manga. The award has been presented every year since then.

Among entries, the gold award will be given to the best work of art and the silver awards to three other excellent works of art.

These awardees will be invited to Japan by the Japan Foundation to attend an award ceremony. During their stay in Japan (generally 10 days,) they will have the opportunity to exchange ideas with Japanese manga creators, visit publishing companies and take excursions to local sites.

For more information and how to apply, visit www.manga-award.mofa.go.jp/index_e.html