Judd Gets His Groove Back

Last night I watched the debut episode of Judd Winick's new animated kids series The Life and Times of Juniper Lee and I ended up really enjoying it. I wasn't sure at first, but as the episode went on I found myself more and more enchanted by it. The basic premise of the series is more-or-less ripped off from Buffy: a girl has been chosen and blessed with abilities to fight the hidden forces of 'mischief and chaos' (no 'evil' in a kids show, I guess). but it's still a lot of fun. It has a great look that's rather unique, not the manga-inspired style that so prevalent in recent cartoons, but more interesting than an old classical approach to cartoons, and very colorful. It flows smoothly with none of the jarring jump-cuts and frentic siezure inducing kinetics of other action-oriented cartoons. The character design work is by Mike (Herobear) Kunkel, and he does a good job with both the main characters and the various monsters--it's a visually engrossing work. While it's not the non-stop hilarity of a Barry Ween (calling Adult Swim...), it is a much better than average action/adventure cartoon for kids, and miles better than whatever the heck Judd is doing these days with Outsiders. New episodes air Sunday evenings on Cartoon Network, with plenty of repeats throughout the week. (Now where pray tell is DC with the print tie-in?) 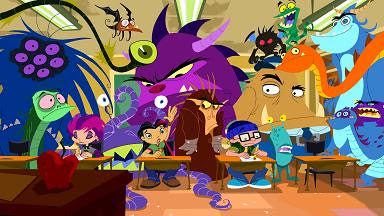 (There's a rather good article about Juniper over at Animation Insider.)
Posted by Dave Carter at 9:33 AM

Judd? Ripping off a premise?