Diamond and The Long Tail

So, the blogosphere is abuzz this week with the news that Diamond wil be enforcing a hard cutoff on low-selling comics. Essentially they won't go forward with orders for anything that doesn't generate at least $600 in orders (or approx 500 copies for a standard $3 comic). If you're one of the three people reading this who hasn't caught up on this news, you can read more about it here, here, here, and here, amongst many other places.

Most observers have been saying that, from a purely economic & business standpoint, Diamond should have done this a long time ago. But no one seems to be talking about The Long Tail effect (or if they have, I haven't come across it yet).

For those unfamiliar, a quick summary: As relating to commerce, especially arts-commerce (or really any non-fungible goods), The Long Tail was coined by Chris Anderson in 2004. Basically he pointed out that collectively, products that have low demand, as an aggregate, comprise a market comperable to the high demand products. The problem is that traditional retail outlets, with the demands of physical storage and distribution costs, realistically can only afford to carry the high demand products, meaning that the market for low demand products, while real and existing, is untapped. The real revolution in online retailing has been the ability to tap into the low demand market; as examples, look at Amazon, iTunes, and NetFlix. 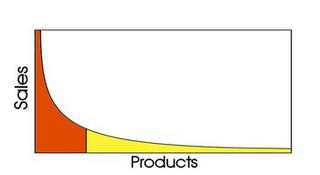 (You can read better and more in-depth explainations at Wikipedia and on Anderson's blog.)

What we see with Diamond's moves then is a perfect example of this in the comic book direct market. Even though the aggregate market for these low print run comics undoubtedly exists, the current retail and distribution chain cannot support it. (I've pointed out before that all it takes for a comic to be profitable is for each comic store to order one copy, but that for various reasons that's never going to happen.)

So, while it "makes sense" that Diamond is taking the steps that it's taken, it also stands to reason that there is a sizable untapped market for low print run comics, and that there needs to be an online retailer that traffics effectively in these comics. A store that's willing to work with the smaller distributers and with publishers directly, and produce a quality online shapping experience. About the closest we have now are Mars Import, although they deal pretty much exclusively with graphic novels; and Poopsheet Shop, which deals exclusively with minis. Both are good at what they do, and could probably expand out more generally to fill the gap, or maybe a new store is needed.

I surely haven't thought this through fully, and I don't have the disposition to be a retailer myself, but it seems to me that there's a market opportunity just waiting to be filled.
Posted by Dave Carter at 12:30 AM

I haven't really made up my mind if or how bad this decision may be for the comics industry, but I think that it's something that may have a long-term impact.

An online
back issue comic stores like Nostalgia Zone, my comicshop and Mile highness are the long tail sellers that handle 100,000 different issues of comics from the 30's to the present.