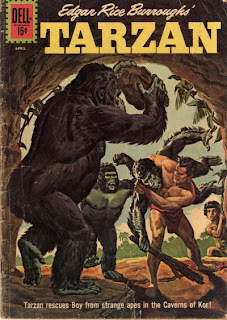 Tarzan rescues Boy from strange apes in The Caverns of Kor on the 1961 cover of Tarzan #129, painted by George Wilson.

(Standard disclaimer about rock- and club-wielding apes not really being monkeys applies.)

Image courtesy of the GCD. Click on the image for a larger version.
Posted by Dave Carter at 8:35 AM