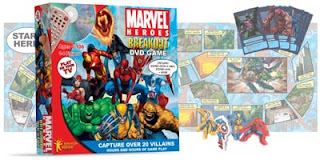 I don't normally review games here at YACB, but when game company Brighter Minds offered to send a review copy of their latest, a comic book-themed DVD family game, I decided to take them up on it.

Like most DVD games, Marvel Heroes Breakout is played primarily by interacting with the DVD via the remote, and supplemented by a physical game board, pieces, and cards. The physical quality of the game materials is good; not deluxe by any means, but they don't feel cheap either. The game pieces for the players represent the heroes (Spider-Man, Captain America, Storm and Wolverine) who must capture the Marvel Villains who (we learn in the introduction to the DVD) have staged a massive jailbreak. By successfully completing challenges on the DVD, the players capture the villains, each represented by an oversized card that has a full-color picture along with the villain's alias and powers. The first player to capture 5 villains (or 7 in a longer game) wins. The DVD keeps track of how many villains each player has captured (so there's no cheating!)

The game board features paths around the New York City of the Marvel Universe, with each spot on the board representing a challenge on the DVD. This is a family game (ages 6-106 according to the box) so there are three different levels of difficulty; each player can choose a different difficulty level, allowing players of differing knowledge to play with each other more fairly.

There are seven challenges in all, each quite different:

Downtown Maze: This is one of the challenges that works with the DVD format quite well. The player is shown a scrolling maze backwards, and then must choose the correct path to take along the maze to reach the villain.

The Villain Locator: This challenge doesn't work well at all. The image of a villain is shown appearing slowly in a 'mist'; the player has five seconds to shout out the name of the villain as s/he appears, then after 5 seconds any player can chime in with the correct answer. The problem is that for the first four seconds, the villain is completely unrecognizable, giving the player whose turn it is just 1 second to correctly identify the villain.

What Did You See?: The player watches a clip from one of the Marvel Heroes cartoons (e.g. X-Men, Spider-Man, Hulk) then must answer a question bout the clip just seen. Makes good use of the DVD format, but for some reason the clips are shown at just 1/4 size instead of full screen. Also there are a limited number of clips (though with multiple possible questions about each clip) so if you play the game more than once you're likely to end up watching the same clips over and over.

Marvel Team-Up: A matching game where you have to open doors to find heroes who belong on the same team (Fantastic Four, X-Men or Avengers) before accidentally matching up two villains. Using the DVD remote this game quickly becomes tedious; not a good use of the DVD format at all.

Super Hero Scramble: As a top, middle, and bottom of a hero scroll by, the player must match them up. Another game that is not very challenging (but seems to be the favorite of my nephew).

Marvel Quiz: Players must answer trivia questions about Marvel comics. These are mostly related to the comics and not the movies which everyone has actually seen--and some of the questions are pretty darn obscure (I myself only knew about 75% of them)--so unless you're a Marvel comics junkie you're going to have to guess a lot (it's multiple choice).

There's an introductory mode where the challenges are explained on screen before each attempt. This is useful the first couple of times, but quickly becomes tedious. Thankfully there is also a non-verbose mode that can be selected when starting a game, but we couldn't figure any way to switch between the two during the course of a game.

The animation on the DVD is an odd mixture of impressive computer generated backgrounds and the stiff cut-out 'animation' of the 60s Marvel cartoons. But it does the job.

I took the game with me on our family vacation last month (for use when bad weather would keep us from enjoying the beach) and we had several chances to play. My seven-year-old nephew loved this game. He spied the brightly-colored box soon after we brought stuff into the cabin and was disappointed that we wouldn't let him play immediately! We first played with four players (myself, my father, my sister and my nephew) and over the course of a few days played in various combinations and numbers of players. A four-player short game took just over an hour (nobody ever wanted to play a long game, the 'short' game was long enough!). It definitely held the interest of my nephew, though the rest of us weren't quite as excited. So even though it's billed as a family game, I'd say that in our experience it definitely skews towards the kids on the family.

We did run into a couple of problems with the game. On our first playing, near the end of the game, the game apparently got confused and reset to the beginning, losing everyone's scores. This only happened to us once, but did have us concerned since it was the first time we played. Also, at least one of the trivia questions--what is Sandman's real name--was confusing; Flint Marko wasn't one of the four choices, even though that's the name given on the included villain card for Sandman. (Only big-time Marvel geeks will realize that, while he usually goes by the alias Flint Marko, his 'real' real name is William Baker.)

If you have a younger (aged 6-11 or so) super-hero fan in the family, the Marvel Heroes Breakout DVD Game will likely be a big hit. But while the rest of the family won't mind playing along, it's really more of a game for the kids.

(For another take on the game, see the review at Cosmic Treadmill)
Posted by Dave Carter at 11:19 AM