Near the end of his discussion on the ICv2 Diamond Sales Estimates for December, Tom Spurgeon remarks:

There also seems to be growth at the bottom of the comic sales chart, a slight shift of 20 or so place for equivalent sales, which is a phenomenon I don't know that I've seen convincing analysis on, but I would imagine has to be encouraging.

Ask and ye shall receive, Tom! 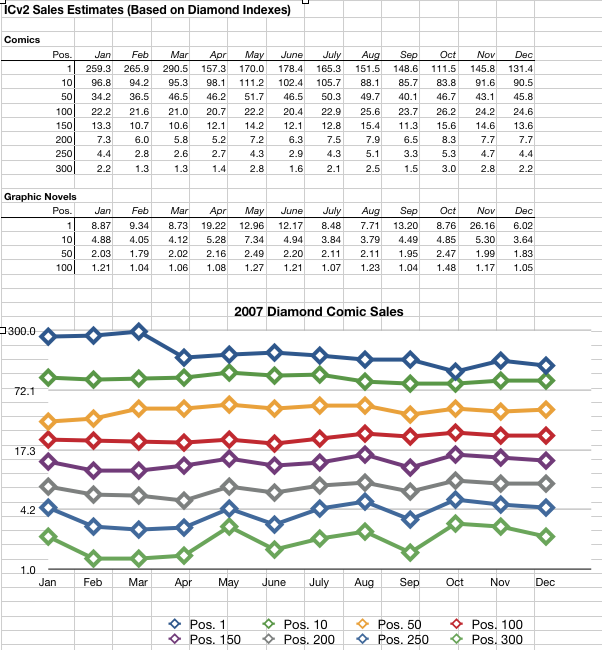 (The Y-axis on the chart is on a logarithmic scale.)

Frankly, I was expecting to see more connections. I thought that high numbers at the top would mean low numbers at the bottom, as the big selling titles would eat away at the mid and lower ranks. This is slightly true, as we can see that the highest numbers for 150, 200, 250 and 300 come in October, when positions 1 & 10 are at the lowest.

But every time I thought a pattern was emerging, along came a data set for the month which quashed the pattern.

(In case you're wondering, the big numbers at position 1 in the beginning of the year are from Civil War #s 6-7, then Captain America #25.)

As far as the graphic novel position data goes, it seems to be completely divorced from anything.

Does anyone else see anything different in the data?

(There is also no doubt a better analysis to be made, such as adding all top 10 slots and comparing to the total of the bottom 50 or something like that. This is just what I came up with for a quick look...)
Posted by Dave Carter at 1:50 PM

This is a fascinating chart. It really drives home how stagnant direct market sales are.

I'd love to see a comparison that did include the top 10 sales positions.