What should you look for at the comic shop tomorrow? I'm glad you asked! 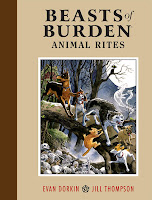 Dark Horse have Beasts of Burden: Animal Rites, a collection of the superb mini-series by Evan Dorkin & Jill Thompson, with the earlier short stories from the Dark Horse Book of... anthologies included. These are excellent stories about a group of pets that defend their neighborhood against the supernatural that are thrilling, emotional and a bit scary at times. The art is some of the best of Thompson's career. The miniseries made my Best of 2009 list.

IDW serve up the second collection of Thom Zahler's wonderful Love & Capes, one of the best super-hero romantic comedies ever produced, featuring the run-up to Mark & Abby's wedding. The comics included here also made my Best of 2009 list.

Also from IDW: Fallen Angel Omnibus Vol. 0, a large collection of the entire original DC-published Fallen Angel series by Peter David & David Lopez. About half of these comics have never been collected before.

Airship Entertainment have the ninth volume of the popular Girl Genius series by Phil & Kaja Foglio, in both paperback and hardcover editions.
Posted by Dave Carter at 5:05 PM