Those of us reading the DC October solicitations may have noticed (like Johanna did) that Batman: The Brave and the Bold and Billy Batson and the Magic of Shazam! are having their final issues. This follows on with Super Friends ending (the last issue came out this month, though I don't think it was ever formally announced); and Tiny Titans is not on the schedule for October either. Also, this month DC raised the price on their kids line to $2.99. 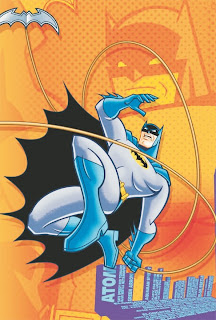 The cancellation of  Batman TBaTB, is somewhat surprising, as the show it is based on is still running on Cartoon Network and there is a video game due out in September. Billy Batson was originally meant to be a showcase for Mike Kunkel—based on the critically acclaimed Shazam! comic by Jeff Smith—but when it became obvious that Kunkel would not be able to stick to a monthly schedule (which really should have been obvious from the get go to everyone) it was turned over to Tiny Titans  writers Art Baltazar and Franco. They gave it their best, but the comic as established didn't really mess with their sensibilities, and a constantly changing art team didn't help matters (although Mike Norton seems to have finally settled in nicely). Super Friends, which replaced the excellent Justice League Unlimited title on the schedule, had a reputation of being 'too kiddy.'

(Outside of the super-hero books, Scooby-Doo is getting relaunched in September with a new subtitle and #1 issue; Cartoon Network Action Pack and Looney Tunes are still intact, at least for now...)

So its fairly obvious that the DC Kids books (formally Johnny DC) are the next target in the new DCE management overhaul. It's not terribly surprising. Despite being of fairly high quality (Especially Batman TBaTB, which I recently highlighted as one of DC's best titles) they haven't managed to capture much readership. It's been speculated that these titles survive on low sales in the direct market due to their being available on newsstands and via subscription, and that collected editions may sell in bookstores.  But I suspect that the new management looked at the overall sales figures for these titles and decided that they could and should do better.

I find it highly unlikely that DCE will stop their line of kids super-hero comics all together. Rather, I think that DCE is rethinking the entire line-up, with an aim towards increasing sales; their overall strategy is to emphasize their corporate-owned super-hero characters, and getting comics featuring those characters into the hand of kids only makes sense. A mini-series crossover with L'il Archie has already been announced for Tiny Titans. The DC Kids panel is scheduled for Sunday morning at SDCC where I suspect we'll see some announcements made. (I highly doubt they'd invite Mike Norton to be on the panel if they were simply canceling his title without there being something to replace it.)
Posted by Dave Carter at 9:39 AM

Thanks for the heads up. I love owning final issues.

Just my own quirkiness I guess.

Comics are so expensive these days. Especially if an elementry kid is skipping lunch to buy comics. They need more ads in the comics to lower prices. Also, hopefully they are revamping like your suggesting. It would be sad for younger kids not to experience a lighter version of some characters.