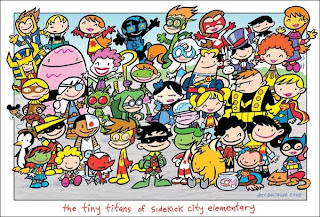 Back in late July I blogged about the uncertain future of DC's line of kid-friendly comics. Three weeks later we now have a bit more clarity:

If DC is smart, they will add a lot of their family friendly output from their entire publishing history into that DC Kids iphone app (Sugar and Spike, classic Shazam comics, Silver Age Superman/Lois Lane/Jimmy Olsen (especially the Jack Kirby Fourth World stuff)/Legion of Super-Heroes etc., Amethyst and so many other books that kids today would love!).