As promised, here is the comic that I created for 24 Hour Comics Day at the Dude this past weekend. But first, a word or two of explanation:

Back in junior high, I used to create one-page comics based on The A-Team and show them to friends. The rub was that I had never seen an episode of The A-Team. Not a one. So everything I knew was based on second-hand knowledge; or I would just make things up! I pretty sure that the comics I did exhibited very little relation to the actual show.

I haven't really drawn anything resembling a comic since junior high, which was over twenty-five years ago. So when I decided to do a comic for 24 Hour Comics Day, I decided to go back to those comics I did in my youth for inspiration. Sadly the copies of those comics are long gone, so this new comic is based on the no doubt mis-remembered comics that were based on a TV show I had never seen. Which is to say that any resemblance to any actual A-Team is purely coincidental.

It should go without saying that this comic is a parody, and in that spirit I've renamed them to be The B-Team. Hopefully anyone who appears in the comic will take it in the spirit in which it is intended.

Sadly, Stephen J. Cannell, the creator of The A-Team, passed away on September 30, right before 24 Hour Comics Day. This comic is dedicated to his memory; I'm sure that he would have put a dinosaur in his version had only the budget allowed.

And please recall that as with all 24 Hour Comics Day comics, this was created in under 24 hours. Not that having any longer would have improved it much... I did the scans on my el-cheapo home scanner, so please excuse the quality.

Here then is the link to the first full-length comic I've ever created: The B-Team Returns. 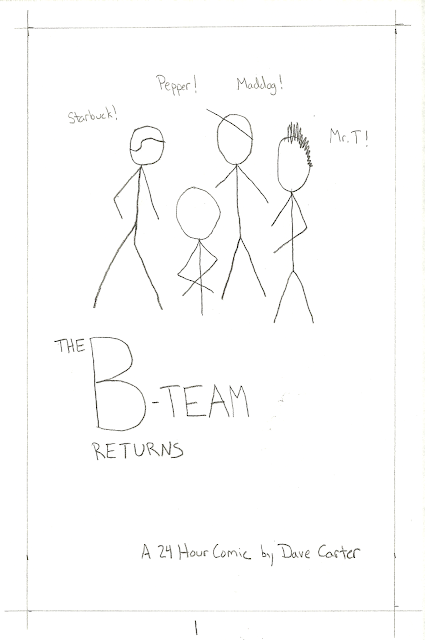 Edit: Here's a picture of me (taken by Phoebe Gloeckner), hard at work staring at a blank page: 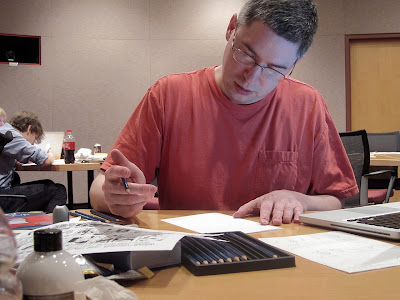 Edit 2: The Web interface to DropBox has inconveniently gone down. I've moved the file over to my personal Webspace, so hopefully the link should work again...
Posted by Dave Carter at 7:56 AM

Hi there - I stumbled upon your blog and it's nice to see another participant in the 24 Hour comics challenge - this year is the first year I didn't participate but for good reason.

I have actually done the six previous 24 Hour Comics challenges and they are on my website as well.

It's like doing a marathon - only for artists and not runners. And the shop I did it at always had lots of great junk food lying around.

That was a terrific minicomic (page 17 in particular). Well done, and congratulations, and thanks for hosting the event and taking part as well.