Sometimes I Hate Being Psychic 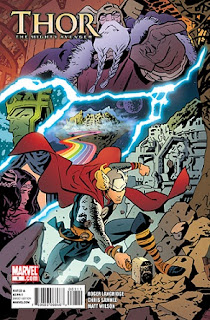 Three weeks ago, I wrote a Ten Random Things About Comics post. Number four was:


4. The big two have created an event mentality that hinders their ability to successfully launch new titles. When you send out the message that "these comics 'matter,'" that also sends out the message that "these other comics don't 'matter.'" Take for example Marvel's new all-ages Thor: The Mighty Avenger; just about anyone who has actually read it agrees that it is very good, perhaps even wonderful. But hardly anyone reads it, because it's not the 'real' Thor, and the out-of-continuity stories don't 'matter.' It also doesn't help that there are something like five or six different Thor comics being published every month right now.

And now we learn that Thor: The Mighty Avenger has gotten the axe, just as former editor Nate Cosby has written an article about the way that overhyped event mentality solicitations are hurting comics.

Apparently Marvel is now undertaking an effort to cut back on the number of multiple titles for identical characters. Which in general is good (and addresses my Number five...) but the fact that they've chosen this particular title is a sad way to begin.

We can gnash our teeth all we want, but there's just no way that an all-ages, non-continuity super-hero book is going to survive at Marvel, especially when there's little promotion and it is lost in a sea of similar sounding titles.

The moral of the story is that if you want better comics, you have to buy better comics. (It should go without saying, but downloading off of torrents doesn't help...) Also, you have to seek out better comics; you cannot count on the comic companies properly promoting their own wares (as crazy as that sounds!)
Posted by Dave Carter at 1:58 PM