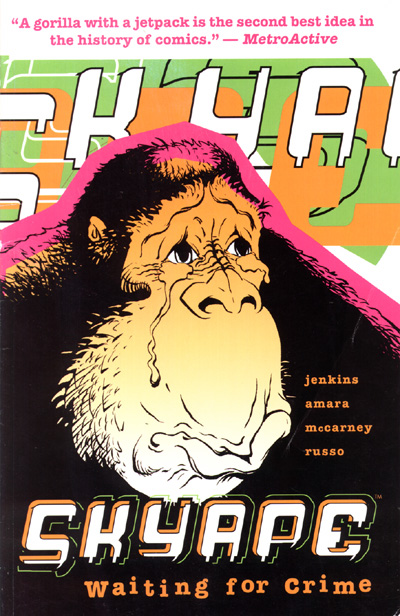 Today's cover is Sky Ape: Waiting for Crime, which I'm assuming is by artist Richard Jenkins.

Strange thing about my copy of this comic: I got it in a trade via BookCrossing, and someone has gone through and used white-out to remove all of the curse words. Now granted, pretty much all of the cursing in here is gratuitous, and honestly I'm not a big fan of gratuitous swearing when a simple $#%@! would work just as well. But still, defacing the text of a comic because you don't like the language used, that's uncool.

As for the comic itself, I liked it, certainly a lot more than I did the original Sky Ape collection. There's still an element of the ridiculous, but the story actually coheres into a narrative that can be followed. The story by Philip Amara, Tim McCarney & Michael Russo finds Kirk Madge, aka Sky Ape, and his crew traveling back in time to stop a group of home contractors from ruining ancient buildings (like pyramids and whatnot) with vinyl siding and hot tubs. It's a bunch of silly fun.

Hmm, this Monkey Cover entry has managed to turn into a quick review. So: Rating: 3 (of 5).

(Be sure to come back to this blog later today for our big First Blogiversary Give-Away Announcement!)
Posted by Dave Carter at 8:49 AM