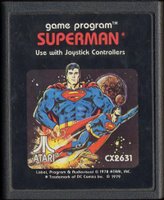 Reading about the upcoming Superman Returns PS2 game, I'm reminded of a much earlier attempt to bring the Man of Steel to home console gaming.

Anyone remember the old Superman game for the Atari 2600?

It must have been one of the worst comic book video games ever--and I played it for hours on end because, y'know, it was Superman.

The game opened with a couple of Lex Luthor's goons blowing up a bridge in Metropolis. As Superman, you had to reassemble the bridge and capture Lex and the goons and return them to jail, then change back into Clark Kent and file your story at the Daily Planet. The game was timed, so the object was to complete the mission in the shortest amound of time. There was just that one mission, so it got awful repetitive very fast. I remember that there was a particular cheat--the details of which I can't recall--that allowed me to finish the game in less that one minute. So, not a lot of replay value.

Though check out the great screen shots--it's the adventures of flying pixel man!

More details about the game at Atari Age.
Posted by Dave Carter at 1:55 PM

You should find screenshots of the planned Atari Fellowship of the Ring game that was pulled from production, pretty much because it was so damn boring.
It was (as the story dictates) pretty much Frodo running away from ringwraiths for several long hours, which in Atari meant you guided a green series of dots away from a black series of dots. Oddly enough, it was still more watchable than the Arwen-Aragorn dream sequence from Two Towers.

As bad as it may be, I love this game to this very day. The fact that it isn't available on that Atari 2600 comp for the PC and PS2 (stupid licensing) is why I've never gotten around to buying it. Adventure, Haunted House, and Yars Revenge are fun, but I want Superman, dammit!

You know what? THe sad thing is that this is actually the best Superman video game ever made.