Diamond and the Long Tail 2

Over a year ago I wrote a blog post about Diamond and the Long Tail. This past Monday Chris Anderson was on campus and gave an interesting presentation about the Long Tail, which got me thinking about it again.

In particular, I decided to take a look at actual sales numbers from Diamond to see if any Long Tail lessons can be learned.

Anderson argues that--absent any market barriers--the natural shape of markets is to follow a power law. This can be visualized by graphing sales rank against number of units sold; on a log-log scale, the graph will be a straight line. Barriers and inefficiencies will cause the tail of the line to bend downward, and the area between the ideal straight line and the downward curve represent lost sales. Typically said graph will resemble a straight line at the top, but at some point it will deviate from the line; this represents an inflection point, and is a point where an analyst can look to see what the problem is and identify solutions. 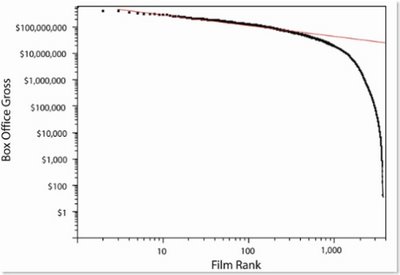 You can see the inflection point at around 350; it turns out that the carrying capacity of US megaplex theaters is a little more than 100/year, and thus over three years they show approx. 350 movies (out of the approx. 13,000 movies that were show in film festivals over the same period).

Anderson surely explains this better in his book, but I think you get the jist here.


So I decided to do a little graphic of my own. I took the Diamond sales figures for August 2006 and graphed them out (click on the graphs to view them at a readable size):

Here it is as a log-log graph:

And here it is with an idealized market line imposed:

It's not surprising to see that the graph looks like many other markets. What is surprising to me is how soon the inflection point hits: right around rank #45. Looking at the raw data, it appears to be right between #45 (Sensational Spider-Man 29: 55,300) and #46 (Green Lantern Corps 3: 51,400). Put another way, that's right at about the mid-list for Marvel, just after the top books for DC, and above any other publisher.

* Trade collections (readers who don't get a comic monthly through Diamond wait for the trade, either at their local store or at a book store or through Amazon)

All of these of course are the concern of Diamond. The last should be a concern to all publishers.

The follow-up question after this is why is the inflection point occuring, and how can it be eliminated? I don't have a good answer yet, but I suspect it has something to do with either the promotional outlay, the 'rack space' for new comics in a typical store, or some combination of the two.

Any other thoughts?
Posted by Dave Carter at 1:50 PM

That is an unusually low inflection point. I would have guestimated it to be around 60 or 70, but thanks to your analysis, we see it is much lower.

Part of this may not have to do with Diamond, but the dynamics of the comics market itself, especially with what you noted about everything above the inflection point being Marvel and DC. You may want to do inflection points for Marvel, DC, and indie to see what you get. There might be some interesting parallels or not. Who knows.

Yeah, I need to go back and do a few more months, to see if the inflection point is always so soon or if august was an anomoly.