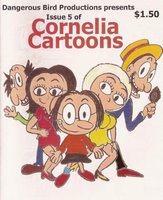 If I were a better comics blogger, I would have gone to SPX this weekend and come back with an armload of new mini comics to tell you about. But alas I didn't (although one of my friends did so I'll have pile to read when he's finished with them!) Or at the very least I would have gone to the Masters of American Comics exhibit in NYC and stopped off at Jim Hanley's and taken a photograph of their minis section. But alas, that twas not to be either.

Instead, I have a comic I picked up at last year's SNAP to tell you about:

Cornelia Cartoons #5 is by Ohio cartoonist Kel Crum. It consists of one 8-page story and four 2-page stories centering around young Cornelia as she interacts with the world of grown-ups. The energy in these comics reminds me somewhat of Scott Roberts' Patty Cake. Crum's drawing style is not sophisticated, but it fits the stories well and adds to their charm. I know there's at least an issue six in existance, so hopefully she'll be at SNAP again this year so I can pick up a copy of the new issue.

(Crum does not appear to have a Website, though you can try emailing her to check on availability.)
Posted by Dave Carter at 6:02 PM