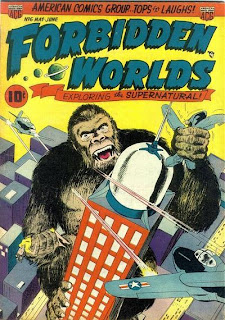 Ken Bald draws the cover to 1952's Forbidden Worlds #6, featuring a giant ape which surely is not named Kong scaling a building which most definitely isn't the Empire State Building. Really.

Image courtesy of the GCD. Click on the image for a larger version.
Posted by Dave Carter at 11:11 PM