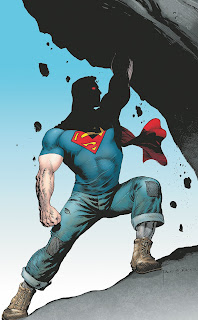 DC is launching or relaunching a whopping fifty-two new titles in September. That's way too many to buy all of them, and this makes for a good opportunity to re-examine what I usually purchase. So here's my take, based on the available information (mainly the solicitations); all 52 of the DCnU relaunch titles, ranked according to my likelihood of buying them:

1. Action Comics - They had me at Grant Morrison + Superman.

2. Superman - I'm actually a bit apprehensive about the Superman reboot, like I am with every Superman reboot. But with Morrison & Perez at the helm, I'm fairly optimistic this time out. Plus, I've bought every issue of Superman since 1982, and I'm likely not stopping until I'm dead or it stops being published.

3. Batwoman - Finally! And with Williams switching off story arcs with Amy Reeder, this will likely be the best looking book on DC's slate.

4. Frankenstein, Agent of S.H.A.D.E. - This looks to possibly be twenty pages of four-color awesome every month.

5. Justice League - I've bought every regular JL comic since the 80s, and this big-guns approach with Johns & Lee looks to be what I'm after in a JL comic.

6. Justice League International - A return to my second-favorite JL era, with Aaron Lopresti on art, makes for a winning combination.

7. Batgirl - Yes, I wish she were still Oracle as much as the rest of you. But I will read a Gail Simone Batgirl comic staring Barbara Gordon.

8. Animal Man - Every Animal Man take since Morrison's has disappointed, but I have hopes for Jeff Lemire giving it a shot.

9. Static Shock - One of my favorite Milestone characters. I wish Rozum were still doing Xombi, but hey, I'll take what I can get.

10. All-Star Western - Gray & Palmiotti's Jonah Hex has been consistantly entertaining for going on five years now, but I'm not sure it needs to lose the done-in-one stories nor does it need a Gotham City tie-in.

11. Wonder Woman - Normally Cliff Chiang drawing anything is an automatic yes, but I'm usually disappointed in Azzarello in general and his super-hero stuff in particular. But, when Azzarello & Chiang got together for Doctor 13, it was wonderful, so I'll hope for the same magic again here.

12. The Fury of Firestorm - Big fan of the character from the 80s and the recent Jason Rusch version as well. It will be interesting to see how Van Sciver & Simone merge their sensibilities in writing.

13. Blue Beetle - Glad to see Jaime Reyes given another go. If the new creative team can recapture the charm of the original, this this will be a winner.

14. Green Lantern - Looks like business as usual, so I'll likely stick around for a while.

17. Batman - I've really liked Snyder's writing on Detective as of late; I just wish he was being teamed with his 'Tec cohorts Jock and/or Francesco Francavilla here as well (I can take or leave Capullo).

18. Swamp Thing - Not completely sold on the reboot premise, but I like the creative team.

19. Demon Knights - Again, not sure about the premise, but Paul Cornell hasn't let me down yet.

20. Hawk and Dove - It'll be a race to see whether this or Batman: The Dark Knight is the first DCnU title to fall behind.

21. Stormwatch - Again, Cornell has yet to let me down, but I really don't see this Wildstorm concept fitting in to the DCnU, and Martian Manhunter seems like a really odd fit.

22. Mister Terrific - Like the character and the idea of his headlining a series, not too enthused by what I've seen from writer Eric Wallace in the past.

23. Supergirl - Not sure about the reboot here, but I've liked Green & Johnson's work on Superman/Batman, so this book gets the benefit of the doubt for now.

24. Batman and Robin - If this can maintain the punch and action I expect, then I'll stick around.

25. Batwing - 'The Batman of Africa' could be a good concept, but I'm not sure that Winick is the best choice for it.

26. Legion Lost - Yet another Legion in their past/our present story? But I like Pete Woods, so I'll check it out.

27. O.M.A.C. - Giffen co-writing and drawing bumps a concept I normally wouldn't care about up into the provisional category.

29. Aquaman - I always give new Aquaman titles a try, but am often disappointed.

30. The Flash - Can Manpul write? I'll give his a shot, but I'm not a huge Flash fan so this will be a very short trial.

32. DC Universe Presents - Paul Jenkins' super-hero stuff normally leaves me a bit cold, but Deadman may be a good character for him. We'll see...

33. Justice League Dark - Horrible title, interesting premise. And that Milligan guy, who will now be writing both the Vertigo and DCnU versions of the character.

34. Detective Comics - I've been floating along with Daniel's work on Batman, but this may be a good place to drop off.

35. Resurrection Man - I never really read this the first go-around, but the premise always struck me as interesting.

36. Voodoo - This will really depend on execution a solid but not exciting creative team.

37. Suicide Squad - One of my favorite high-concepts ever in comics returns, but everything about that cover screams at me to stay away.

38. Blackhawks - Could be interesting, but could also go disastrously wrong. (Now if Jock were drawing this, I'd be all up for it...)

39. Men of War - I think I'd rather see this as a straight war comic without the super-hero-y stuff.

40. Grifter - Nothing much exciting here for this Wildstorm transplant.

41. Catwoman - The cover indicates that this is everything I don't want in a Catwoman comic.

42. Captain Atom - I like the charatcer and have very fond memories of the old Cary Bates series. But I don't care much for either creator.

43. Superboy - Looks like they're throwing away all the Superboy continuity. I really liked with Jeff Lemire was doing with the character, so this looks like a huge step back. The new creative team doesn't much appeal either.

44. Batman: The Dark Knight - Haven't really cared much for Finch on this title the first time around. Then again, committing to this title would only mean buying two or three issues a year...

46. Teen Titans - Seems like for the last five years or so I've always been on the verge of dropping this title, but there was always another new creative team around the corner. But this looks to be the final straw.

47. Nightwing - My level of not caring for any aspect of this is pretty darn high.

48. Birds of Prey - I've bought every single issue of BoP up to this point. And now? Ugh.

49. Red Hood and the Outlaws - Absolutely no appeal here.

51. Green Arrow - One of my least favorite writers on a character I could care less about.

52. The Savage Hawkman - Non a huge fan of Tony Daniel's writing, and even less of a fan of Philip Tan's art. A very easy no.

I'm afraid to hear what they're going to do to Birds of Pray. GS leaving would probably be enough, but do they have other terrors?

What are they doing to Birds of Pray, other than Babs? Is GS leaving?