A Short Report (and a Few Pics) from Kids Read Comics

On Saturday I took my nephew (age 11) to the Kids Read Comics festival in Chelsea, MI. Based at the Chelsea District Library and running down Main Street at various locations, it was pretty much everything you could want from a comic festival aimed at kids and teens.

We started the day at a workshop run by Dave Roman on creating characters: 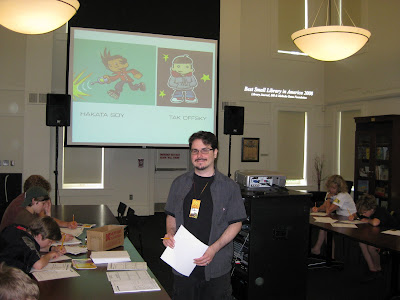 We then hit the kids artist alley and bought a few things (I picked up some minis for our library's nascent mini-comics collection), and then stopped by the Green Brain table where Dave Roman & Raina Telgemeier were signing. My nephew bought a copy of Dave's new Astronaut Academy graphic novel, and was thrilled to get his copy of SMILE autographed by Raina (he says it's his second favorite graphic novel, right after Bone.)

We then walked down Main Street (past the Jiffy factory) to the pizza place which was having an all-you-can-eat buffet for the attendees. There we met up with my friend E~ and his family (K~, who buys adult comics for one of the local public libraries, and their kids ages 5 and 1).

After lunch we stopped over at the teen artist alley, where I got to tell Thom Zahler, John Ostrander, Bill Loebs, Barbara Slate, and Gary Cohn how awesome they all are; Barbara was impressed and a bit surprised that I fondly remembered her old Marvel series Sweet XVI!

Walking back up the street, we caught the tail end of one of the quick draw sessions, where artists would do large sketches based on whatever passersby suggested. With my nephew's help we suggested that Raina Telgemeier draw a monkey throwing banana pulp at the headless horseman. Here she is in progress: 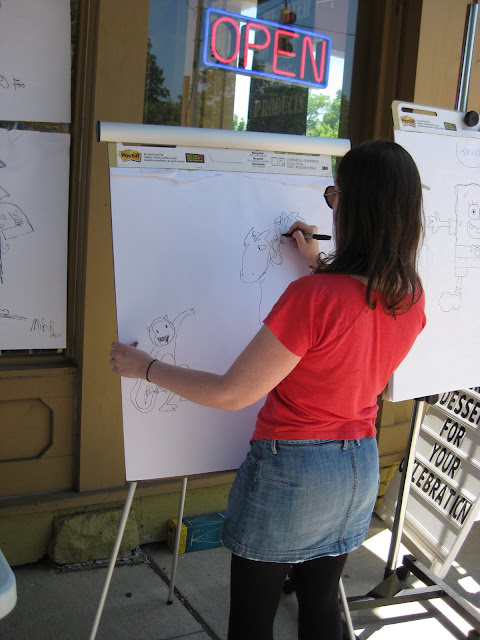 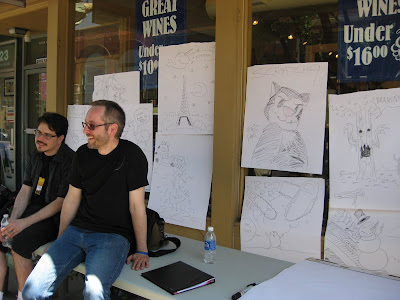 Then we went across the street to look at the Comic Jam! exhibition at the Chelsea River Gallery. Then we swung back up to the kids artist alley for one more run through before heading back home: 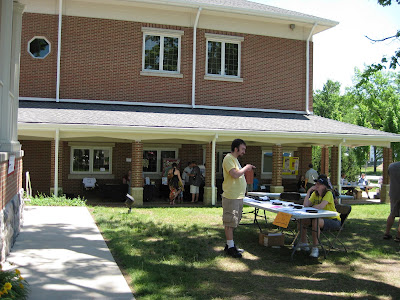 It was a great day for a comics festival, and my many thanks to all the organizers for their hard work. I assume there will be another Kids Love Comics festival next year, so I strongly recommend that you find a kid and take them!
Posted by Dave Carter at 6:59 PM