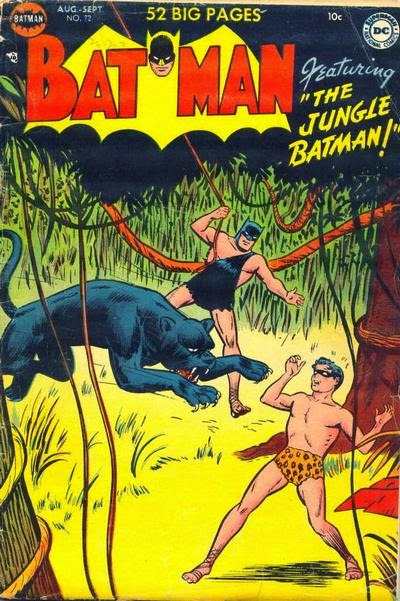 We should note here that at the time, many of DC's titles were on a bi-monthly, quarterly, or other schedule. So titles like A Date with Judy, The Adventures of Bob Hope,  All-American Western, All-Star Western, Big Town, Dale Evans Comics, Fox and the Crow, Funny Stuff, Leading Screen Comics, Leave It to Binky, Movietown's Animal Antics, Mr. District Attorney, Secret Hearts, Wonder Woman, and World's Finest didn't have an August cover-date issue in 1952.

All titles were 10¢—90¢ in 2014 dollars—for around thirty pages of story (except for Batman, which was extra-sized but the same 10¢ price!) (Inflation figures from the Bureau of Labor Statistics inflation calculator.)

(Of course, today's DC comics have higher quality production—coloring, paper quality, etc.—and creators tend to be which may or may not be worth the extra cost to you.)

Tune in next week, when we finish our journey through time and travel to 1992!
Posted by Dave Carter at 3:01 PM