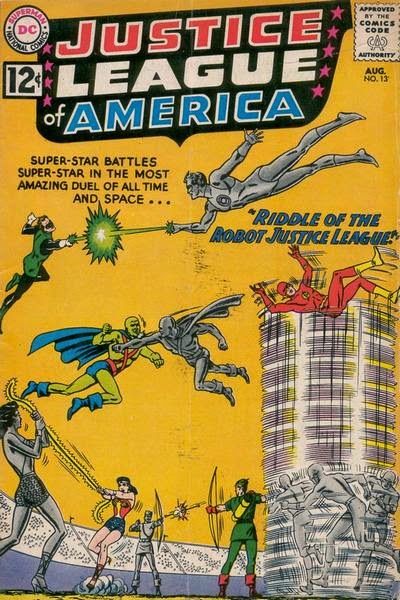 It's week three of our journey into DC's past. Previously I looked at DC's offerings for August 1982 and August 1972, and this week I'm heading over to the DC Database Wiki to look at August 1962:

We should note here that at the time, many of DC's titles were on a bi-monthly, quarterly, or other schedule. So titles like The Adventures of Bob Hope, The Atom, The Brave and the Bold, The Fox and the Crow, G. I. Combat, Green Lantern, Heart Throbs, House of Secrets, Showcase, Star-Spangled War Stories, Sugar and Spike, Superboy, Superman's Pal Jimmy Olsen, and others didn't have an August cover-date issue in 1962.

All titles were 12¢—95¢ in 2014 dollars—for 26 pages of story. (Inflation figures from the Bureau of Labor Statistics inflation calculator.)

(Of course, today's DC comics have higher quality production—coloring, paper quality, etc.—and creators tend to be which may or may not be worth the extra cost to you.)

Tune in next week, when we journey back even further in time to 1952!