Back with part 2 of Previews-o-Rama for December:

About Comics have a one-shot collection of Welcome to Heaven, Dr. Franklin, classic work by Bill Loebs that I've never heard of before, but should be good. Loebs is at his best, I think, when he's drawing what he writes.

More Keif Llama from Matt Howarth at Aeon. By this point, I've probably gotten all of you that I can to read Howarth, right?

I wonder what the chances are that any of this month's Alias solicits will actually ship? I see that they've raised their prices though--surely a result of the new Diamond policies--but let's face it, what a struggling publisher with an image problem really needs to win readers over is to increase the price of their comics.

Amaze Ink/Slave Labor have a new issue of Rex Libris , which should be cool.

Antarctic's Oz: The Manga gets an epilogue issue (you just thought the 8-issue limited series was over at 8 issues!), and Rob Espinosa starts up a four-part full-color adaptaino of Alice in Wonderland. Also, the Ninja High School: Hawaii Pocket Manga has already been pulled from Diamond's shipping schedule, which must be some sort of record for quickest cancellation.

I've read the black-and-white version of David Petersen's Mouse Guard, and it's just as charming as the preview pages here make it out to be (even if story was a little light).

COnsidering the Claypool is struggling with the new Diamond cut-offs, it's a shame that the solicit for the jump-on issue of Soulsearchers is accompanied by the wrong cover, an issue of Deadbeats...

You know, the Sci-Fi Channel's movie version of Painkiller Jane wasn't half bad; but even though I have very little memory of the comic, there was very little in the movie that seemed to be related to the story of the comic. But hey, now there's a new comic, from D.E., so you can be sure that each issue will have multiple covers, and be late (although Jimmy Palmiottu & Lee Moder aren't known for their lateness, so maybe there's hope...)

Does anyone else find it ironic that Josh Blaylock isn't self-publishing his How to Self-Publish Comics? (And in what universe does this need to be a four-issue series with each 32-page issue at $5?)

For some reason I'm finding it difficult to work up much entuiasm for any of this month's offerings from Drawn & Quarterly and Fantagraphics.

You know, I vowed at one point that I was never going to be buying any of IDW's $3.99 comics, as they broke my $3 rule for price on 32-page comics. But dammit, now I'm buying five titles from them this month (Angel, Spike vs. Dracula, Fallen Angel, Maze Agency, and Supermarket).

Now that they've raised the price to $5, I'll be dropping the monthly Knights of the Dinner Table magazine. It's hard to begrudge them, as the thing is 80-pages long, but I'm really only interested in teh 20 pages of comics in each issue, so it's really not worth it. But now that they're rapidly catching up with the Bundle of Trouble collections, I think I'll wait and read them that way.

Queen & Country: Declassified II finally gets collected. I've been missing my Q&C fix (I'm #2 on the wait list for the new novel from the public library...)

Pantheon has a graphic novel adaptation of the A Scanner Darkly movie; but really, you should just read the original novel, as it's one of Philip K. Dick's best.

Puffin have two of the Graphic Classics that should be of interest to you because of those providing the art: Alex Niño on The Call of the Wild, and Becky Cloonan on Dracula.

OEL from TokyoPop this time out include Ross Campbell's The Abandoned and the second volume of I Love Halloween (just in time for Valentines Day!). There are also new volumes of Beck and Telepathic Wanderers.

Viz have a new volume of Osamu Tezuka's Phoenix. 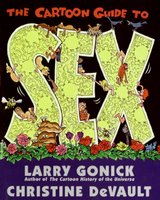 Back in the books section you'll find two very good Larry Gonick books: The Cartoon Guide to the Environment, which is informative without being too preachy; and The Cartoon Guide to Sex, the best sex-ed book I've ever read (I wish we'd had it as a text back in sixth-grade health class!)


Okay, that wraps it up for this month--sorry this second part was so late. If you'd like to see Previews-o-Rama return on a permanent basis, please use the comments and tell me so.
Posted by Dave Carter at 3:47 PM

[Puffin have two of the Graphic Classics that should be of interest to you because of those providing the art: Alex Niño on The Call of the Wild]

Hey! How about those of us providing the script? ;)