Mid-90s Inter-Company Crossovers That Never Were

Mid-90s Inter-Company Crossovers That Never Were.
#1 in a series? 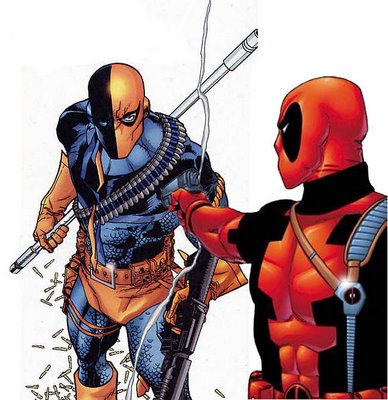 You just know that in 1994 this would've sold oodles of copies.

The Maggia hires Slade Wilson--aka Deathstroke, the Terminator--to take out Lex Luthor. After a near miss, Luthor hires Deadpool to pro-actively defend him by eliminating Deathstroke. Much combat ensues.
Posted by Dave Carter at 3:21 PM

Email ThisBlogThis!Share to TwitterShare to FacebookShare to Pinterest
Labels: imaginary

This is basically the story in the recent Superman Batman annual. It's an alternate world crossover where Deadpool is protecting Batman from an assassination attempt. The assassin is of course Deathstroke. It includes a scene of Dealpool pummelling someone with his own severed arm, so you know it can't all be bad.