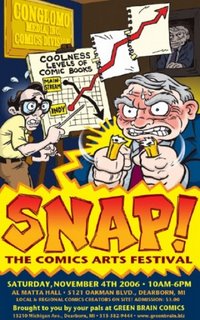 I had a good time at SNAP! on Saturday and picked up a lot of cool stuff. I'll do some real reviews of some of the comics in later editions of Minicomics Monday, but here are some highlights:

Easily the coolest thing I got this year was the collected edition of Cool Jerk & Homo Gal, the early minicomic from Sean Bieri featuring the titular Defenders of Detroit's Cass Corridor. I first read these way back in library school when Sara came bounding into class one day, thrust a bunch of the minis into my hands and told me to read them. I laughed then, and I'm laughing now. Plus, for $3 collecting the six minis it's a good deal too.

Matt Feazell was there too of course with a couple new issues of The Amazing Cynical Man, and Pam Bliss had a couple new Kekionga Miniworks, including the oblong-shaped "The Smell of Midnight" featuring everyone's favorite werewolf librarian.

I'm also ready to add Suzanne Baumann to my list of area minicomicsers whose work is not to be missed, as I'm really enjoying her work and she's nice and friendly and really seems to enjoy her cartooning. I picked up both issues of her As Eavesdropped... and laughed quite a few times.

Matt, Sean, Suzanne & Pam shared the middle aisle with Jim Ottaviani (though I see him once a week or so at work) and the kids from the U-M School of Art & Design with the second volume of their Empty Pockets anthology.

But enough with the old faves--how about some new stuff?

I was very impressed by Max Ink and his chapbook series Blink. His art is very good--reminiscent in ways of Alex Robinson--and based on the pages-in-progress he had on hand for his fourth issue he keeps on improving. Plus Max was very friendly and professional; he had a free 10-page minicomic he was giving away and was drawing sketches on the back for people whether or not they bought any of his comix. If he wants to make the leap to 'regular' comics I have no doubt that he'd be a success.

I was pleasantly surprised by Tom Williams' S.P.B.: Rise! I didn't care much for Williams' early work, but this chapbook with its addition of a sepia-toned color scheme brings it to an attractive new level.

Biggest pleasant surprise was Josh Johnson and his new hardcover book The Spindletons. Gorgeous to look at. Johnson also does a lot of handcrafted books which are pretty to look at (though a bit pricey).

In all we spent a couple of hours there. (We being myself and Annette, our Art & Design librarian who was buying items for the library collection. It was quite amusing to see the range of reactions from sellers when she asked them for a receipt!) Once again the fine folks at Green Brain Comics did a great job of putting on a good comic art show. Here's hoping this becomes an annual event!
Posted by Dave Carter at 8:46 PM