"Why Aren't You Ladies Reading Supergirl?!" 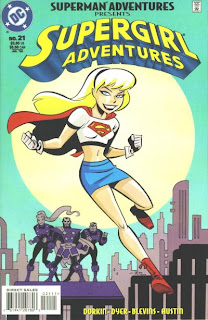 Perhaps the most funny/sad thing I've read in a while is this week's DC Nation. In it, editor Eddie Berganza implores female readers to please please please read the current Supergirl comic.

I can understand why Berganza would be worried. Once one of DC's top selling titles, sales on Supergirl have recently begun to plummet. This corresponds with a perceived change in direction for the title, with Berganza, writer Joe Kelly, artist Ian Churchill, and asst. editor Jeanine Schaefer trying to make Supergirl more girl-friendly. But their plans seem to be backfiring, as apparently many of those previously buying the title are leaving.

If Berganza & DC are serious about creating a Supergirl comic that appeals to females, they need to completely change direction. A good start would be hiring the team behind the "Supergirl Adventures" issue of Superman Adventures: Evan Dorkin, Sarah Dyer, & Brett Blevins. (Actually, a good artist capable of an animated and/or manga-influenced style would be perfect if Blevins isn't available.) They must also be prepared for the book to sell far less in the direct market, more in the realm of a Johnny DC book. Because most of the fanboys who bought the early issues won't buy it, and most of the ladies will prefer to buy it in bookstores.

If DC wants a Supergirl comic that appeals to teenage boys (and creepy middle-aged men...) then fine. But don't expect the same comic to appeal to female readers in any great number.
Posted by Dave Carter at 12:38 PM

it is disappointing that 'girl friendly' doesn't equal sales and that to keep the title afloat DC may have to return to 'perv horndog friendly' tactics.

If you're talking about appealing to young girls, I can see your suggestion working. I have seen 9-13 year old girls recently that read manga, but I think it's more for the type of story than the art style.

My four-year-old daughter definitely enjoys the female characters in Teen Titans. They're strong characters . . . and consistent. And that kind of predictable character means a lot, to both my daughter and seven year old son. Supergirl is quite frankly boring and unpredictable. Her character isn't anywhere nearly as defined as her cousin's.

My wife (very new to comics) enjoys Y the Last Man, Ex Machina, and Fables, all of which are fairly character driven stories with action.

I bought the first two issues of Supergirl and the issues of Batman-Superman with her, but to be honest, I thought they were pretty boring crap. Supergirl in Legion is more interesting, though frankly still annoying. Wonder Woman is nothing but eye candy for the boys. I read the first three issues, trying to give it a chance, and the writing, the plot, and the characters were just awful and muddled.

Want a comic that appeals to women? Have a solid idea about how to write an interesting but consistent character. Chances are, it'll appeal to guys, too.

I agree that a comic that is aimed at females probably won't sell the same as their main comics. But if the companies want to grow their audiences, they have to start with the smaller circulations, stick with them, and build up that audience.

IMO, here are a few things comics should do:

Have more than one female character, and have them interact with each other.

I don't think DC's Minx line has produced anything yet, some of which don't look very good. "Good as Lily" is an intriguing concept.

Sorry to go on, but this is a very interesting topic.