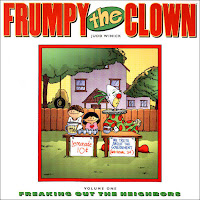 There's a common attitude towards his work that you seem often from online commentators; Valerie D'Orazio's recent comment is typical:

Judd Winick is still the guy nobody understands why he is still writing these books but somehow he is.

Most likely Winick continues to get work due to some combination of:
a) he turns his scripts in on time
b) he writes what the editors ask him to
c) his page rate is reasonable

Doing what the editor wants and turning it in on time for a good price will no doubt keep a career going, even if it doesn't result in great comics.

Recall that Winick's early career as a cartoonist was much different. After struggling in syndicated newspaper strip purgatory with the funny but overlooked Frumpy the Clown (based on a character he created for his student strip Nuts & Bolts at the Michigan Daily), Winick created the multi-award-winning Pedro & Me OGN, did the Eisner-winning "Road Trip," and did several hilarious mini-series of his Barry Ween character for Oni. It was only when he started writing multiple super-hero scripts for DC that he gained the reputation of being a hack--and even then, his early work on Green Lantern and Marvel's Exiles was, while not universally praised, at least well regarded.

(Winick also created the kids cartoon The Life and Times of Juniper Lee, which was better than 90% of the cartoons these days and also better than most of his recent super-hero writing.)

I'd like to see Winick go back to drawing his own stuff at some point, to see if he can recapture the magic. But sadly I expect that cranking out scripts for DC pays better.
Posted by Dave Carter at 2:33 PM

Email ThisBlogThis!Share to TwitterShare to FacebookShare to Pinterest
Labels: commentary