Most of you know by now that comics writer Steve Gerber passed away Sunday.

Most long-time comic readers are fans of Gerber's form his work on Howard the Duck; or perhaps The Defenders, Man-Thing, or Omega the Unknown.

I was a mostly DC kid, so my introduction to Gerber was in The Phantom Zone, a four-issue head-trip by Gerber and artist Gene Colan: 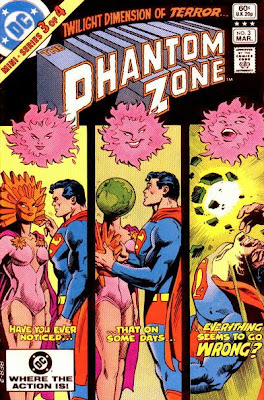 Basic plot was that Superman was trapped in the Phantom Zone and had to make his way through a multitude of dimension to make it back to Earth to stop the nasty Phantom Zone criminals who had escaped. Nearly all of the DC heroes took part in the battle for Earth while Superman struggled to reach home, and it was truly epic. It would be great (though alas unlikely) if DC could collect this into a trade.
Posted by Dave Carter at 3:46 PM