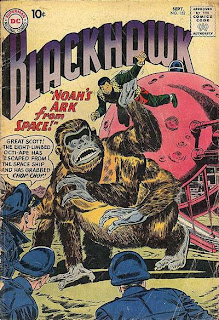 From 1960's Blackhawk #152, an eight-limbed Octi-Ape from space terrorizes the Blackhawks. It appears that in the 60s, even war comics were invaded by silly sci-fi. Still, how could anyone pass on a comic with an Octi-Ape on the cover?

This week's Monkey Cover was suggested by Mike Sterling, who's enjoyable Progressive Ruin is one of my daily stops in my comic blog-reading. Thanks Mike!

If you'd like to suggest a monkey cover to be featured here, please drop me as email.

(Standard disclaimer about apes not really being monkeys applies.)

Image is courtesy of the GCD. Click on the image for a full-sized version.
Posted by Dave Carter at 7:35 AM