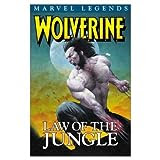 Wolverine Legends, vol. 3: Law of the Jungle
by Frank Tieri, Sean Chen & Tom Palmer, Terry Dodson & Rachel Dodson
Collecting Wolverine #181-186, in which Wolverine gets involved with the mob. People die, and bad guys get their comeuppance. It's not a terribly deep plot, but Tieri makes it work well enough. This is almost a textbook example of modern decompression and writing for the trade; the story is stretched out longer than it needs to be, but reading it in one package makes it seem not so bad. The art by Chen & Palmer works well for the story, showing a few echoes of Romita Jr. The final collected issue, featuring Wolverine facing off in an issue-long throwdown with The Punisher, is meant to serve as a denouement but is just monotonous, and the art seems out of place, clashing with the rest of the book and not up to the usual high standards of the Dodsons.
Rating: 2.5 (of 5)

What's Michael, vol. 5: Michael's Favorite Spot
by Makoto Kobayashi
What's Michael often gets compared to the American comic strips Garfield and Heathcliff, but those are really poor comparisons. The only thing What's Michael has in common with those is that it features an orange-haired cat. So how is What's Michael different? For one thing, it's often funny, with much more regularity than the afforementioned strips. Kobayashi writes short stories (usually eight pages or so) in which a cat name Michael is either central or peripheral. Although the cats look the same and have the same name, they're different cats in different situations; in other words, there's no real continuity from story to story (so no need to start with volume 1--just pick one and dive in). Also, Kobayashi's art, while a bit cartoony, is very good. He especially does a good job at rendering cats which manage to show human-like expressions while still looking more or less like real cats. Never a deep experience, What's Michael nevertheless provides a quick dose of feline-related humor.
Rating: 3 (of 5)

Canvas
by Alex Follows
Canvas is a typical alt-comic teenage girl having typical alt-comic teenage girl experiences, like meeting a kind of creepy guy at a party and going to a campground with her parents where she experiments with booze and sex. It's made slightly surreal by the fact that her parents are anthropomorphosized animals, but other than the fact of that oddity nothing is never made of it. That's fairly typical of this story as a whole: every time it threatens to get interesting, it backs away and returns to the clichéd path. A Xeric award winner, Follows shows some talent, but he needs to let go of the conventions and follow his instincts.
Rating: 2.5 (of 5)