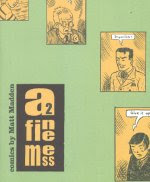 A Fine Mess #2
by Matt Madden
This 32-page comic contains several stories by Madden, each of which is an experiment in comics narrative. The opening story, "Prisoner of Zembla," is structured around the roman alphabet, while another, "The Six Treasures of the Spiral," makes use of artistic and dialogue repetition in adopting the style of a sestina poem. Each of the stories employs a different artistic style as well, giving this comic much visual variety, and Madden shows that he is skilled in all of them. A good comic to entertain and stretch your comic-reading mental muscles at the same time.
Rating: 3.5 (of 5)

Or Else #1
by Kevin Huizenga
Another collection of short stories done in a variety of styles by a single artist, Or Else, for me at least, is not quite as successful. "NST 04," is a purposely disjointed story, with events from panel to panel being seemingly unrelated. "Chan Woo Kim" juxtaposes text from adoption papers with serene nature scenes done in a classical Japanese style, but to what end I'm not sure. The best story of the bunch is the conclusing story, "Jeezoh," which supposedly draws on a legend from the midwest regarding the fate of the souls of aborted, stillborn and miscarried babies (though having lived in the midwest all my life, I have to admit that I've never heard of the legend before this. Huizenga has a lot of talent, and in a book like this there's bound to be stuff that works and stuff that doesn't, and reactions will vary from reader to reader. So give it a look.
Rating: 3 (of 5)

Titus von Götheborg
by Ulf K.
In this collection of one-page strips, Titus von Götheborg is a German composer whose cleverly humorous adventures center around the physical manifestation of music. Though wordless, there is dialog of sorts in the form of musical notes and images in thought and word balloons. Ulf K. has an enjoyable cartoony style that is easy to follow, and he packs a great deal of story into each four or eight panel strip. It makes for a quick but enjoyable read.
Rating: 3.5 (of 5)