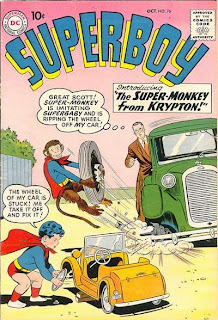 From 1959's Superboy #76, Curt Swan & Stan Kaye bring us a cover illustrating the feature story, the origin of Beppo the Super-Monkey. A founding member of the Legion of Super-Pets, Beppo stowed away on the rocket that brought Kal-El to Earth, where the lighter gravity and yellow solar rays gave him super powers.

How could anyone not like Beppo the Super-Monkey? He has all the powers of Superman, and he's a monkey!

(I only own two items from DC Direct, one of them being the plush Beppo. Because, you know, Super-Monkey!)

Image is courtesy of the GCD. Click on the image for a full-sized version.
Posted by Dave Carter at 11:36 AM