Common wisdom has it that anthology comics, particularly monthly anthologies with serials, don't sell. As is often the case, common wisdom is wrong.

What's the top-selling monthly comic? At nearly 200,000 copies per month, it's Shonen Jump, a monthly anthology of serials from Viz.

Of course, what common wisdom means to say is that slim super-hero anthologies by Marvel, DC or Image don't sell in the direct market.

So why does Shonen Jump sell bucketloads each month, while front-of-Previews publishers haven't been able to support an anthology for decades?

It all comes down to value, perceived and otherwise.

How can Viz afford to publish Shonen Jump at such an attractive price? They keep the costs low. Every issue of Shonen Jump is black and white, on newsprint. Every feature in Shonen Jump is reprint material from Japan, so they don't have to pay much for the material.

In addition, most of the features in Shonen Jump are collected into trades, which gives Viz yet another revenue stream for the same material.

Could Marvel and/or DC capilatize on the Viz approach? Undoubtedly. Both publishers have a decades-long list of comics that could be appropriated for anthologies. And not just super-hero stuff; they have war comics, horror comics, romance comics, kids comics, crime comics, sword-and-sorcery comics, science fiction comics, etc. There's no reason why these huge backlists couldn't be plundered and put to use as material for low-cost anthologies targeted at the newstand market.

Look at it this way: both companies are sitting on huge piles of intellectual property that are just sitting there, unused. It's almost criminal not to aggressively utilize this property, and Viz has shown the way to do it. They just need to jump on the bandwagon.

Of course, these stories would need to be reprinted in black and white; but honestly, color and reproduction in the old days wasn't all that great anyways, and most of this old material will work fine in balck and white (some may even look better!)

Let's imagine an anthology, shall we?

It would be an anthology of DC war comics from the 70s and 80s. Support for the military is big these days, right? Call it something like Our Fighting Forces or Star-Spangled War Stories or something equally patriotic.

At 250 pages per issue, and with most of these old stories lasting 10-15 pages, each anthology would have 15 to 20 stories per issue. That's a lot of action!

Typical contents would be: A Sgt. Rock story (by Robert Kanigher & Joe Kubert!); a Losers story (by Jack Kirby!); a Haunted Tank Story; an Enemy Ace Story; and others. 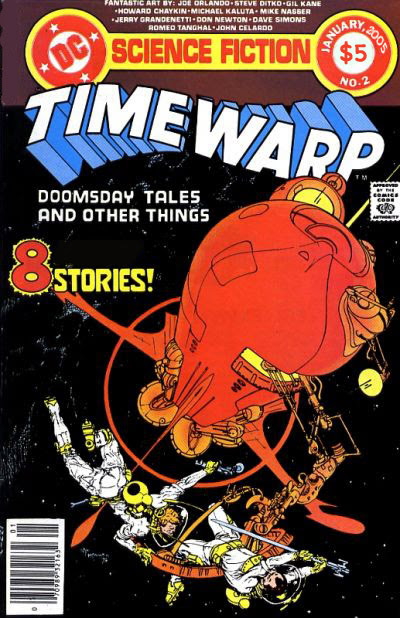 Or how about a Science Fiction anthology, with stories by Gil Kane, Howard Chaykin, Michael Kaluta, and others?

You could similarly imagine an anthology of DC's sword-and-sorcery books, or horror, or mystery. How about a kids anthology, mixing classics like Stanley and his Monster and Sugar & Spike with some of their newer stuff from the DC Kids line. Or heck, even super-heroes. They could even try a more upscale anthology of old Vertigo material (targeted at adults, of course).

Marvel comes close with their Essential volumes, collecting consecutive runs of titles or characters. They might try instead to reprint everything they offered in a particular month into a thick anthology, at a price point that would appeal to youngsters outside of comic shops.

(Of course, there's no reason why these anthologies couldn't be offered to the direct market as well--I'm sure that they would appeal to quite a few of us aging fanboys!)

Will these approaches work? There are no guarantees of course, but I think that it's worth a try. Viz seems to be making money off of it. Archie too, with their endless recycling of older material into digests.

So: Thick anthologies of reprint material. How about it?
Posted by Dave Carter at 1:28 PM

Oh, you're totally ripping me off! We must now fight to the death. I think your idea is excellent - I just bought my first Essentials volume (Spider-Man Vol. 1 - what else?) and would love to see more like them from both Marvel and DC. I think original material could work, as well. It's frustrating that the Big Two aren't doing more to bring in new readers. Everyone would like these things in these formats!

We still must fight. I have a friend in Michigan, and when I visit her - it's go time!

Greg: I totally didn't see your bit before writing this. Guess there must be something in the water, eh?

Dave: I think your idea works better, but I was thinking more of a book like Solo, which is pretty short, but with different creators. I know it's been tried before -- the Unlimited books by Marvel, DC's Flinch, but the price was always the sticking point -- nobody wants to buy an issue these days with unproven talent unless it's pretty cheap. That's why I wonder why they don't try my way. As for yours, I think it's brilliant, especially because Marvel IS having success with the Essentials -- the only thing even close that DC is doing is the Archives stuff, and 50 bucks is a pretty penny to pay for those.

Good stuff, but one thing to take issue with a bit. Many of the titles in Jump are super-popular in Japan, so I doubt they were cheap to license. I think their strategy is more like this:

Shonen Jump gets out on newstands which is a good way to advertise their titles, and the b&w printing means they don't speend too too much on the print side. I would guess that Jump is either a loss-leader or has a pretty small profit.

However, even if it lost a bit of money, look at all the ads for the graphic novels. If they pay off most of the license cost with Jump, then any GNs sold will have a lot more profit.

That's probably part of the reason why the Jump GNs are are $8 instead of $10 (though they don't all actually run in the anthology).

That is actually more like the system in Japan, where the anthologies are like a giant ad for the GNs..

I've read that the licensing is relatively inexpensive even for the popular titles, because the U.S. readership is so small compared to the Japanese. Still, I imagine that Jump contains a mixture of cheap and not-so-cheap features. (I doubt that the licensing costs are something that Viz will ever reveal...)

You are probably right that SJ doesn't make much of a profit on its own, but as part of an overall publishing strategy it works well for them.

Great idea! Why *don't* they reprint those old stories?