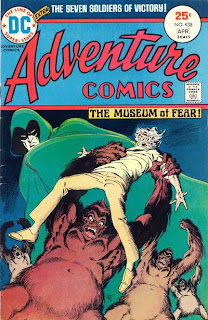 In honor of Jim Aparo, who passed away last week, today's cover is Adventure Comics #438, the March 1975 cover by Aparo that features the Spectre and a bunch of gorillas with what appears to be murderous intent.

(standard disclaimer about gorillas not really being monkeys applies)

This cover was suggested by YACB reader Nuadha. Image is courtesy of the GCD. Click on the image for a larger version.
Posted by Dave Carter at 11:27 AM

That's a great story, reprinted in Wrath Of The Spectre's trade. You should look it up.