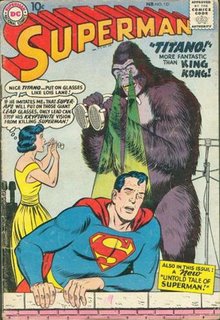 After a month of Jungle Girls vs. Apes, we're returning to regular monkey covers. But of course there's nothing 'regular' at all about any monkey cover, and what better way to kick off the month of October than with Titano putting the hurt on Superman on the cover of 1959's Superman #127, drawn by the man himself, Curt Swan, with Stan Kaye on inks. A giant ape with Kryptonite vision--that's still one of the 10 coolest concpets in comics books of all time!

BTW, this story is reprinted in the recently-released Showcase Presents: Superman, vol. 1, along with hundreds of other pages of silver age Superman madness.

Image courtesy of the GCD. Click on the image for a larger version.
Posted by Dave Carter at 11:25 AM