Over the next several days I'll be going over the various comics I picked up at SNAP!, which was held yesterday in Dearborn, MI.

Since it's Sunday, I thought I'd kick things off with comics with monkeys on the cover. Because there's nothing better than a comic with a monkey on the cover! 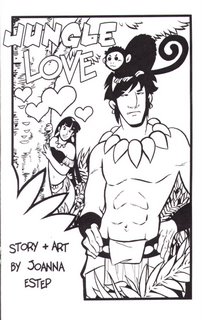 First up we have Jungle Love, a chapbook by Joanna Estep. Monkeys don't play a prominent role in this adorable tale, but they hang around the edges and add a bit of metaphorical flavor. Estep's take is light on dialogue, but she is able to tell her story through largely through the visuals. She's providing the art for the upcoming TokyoPop OEL title Roadsong; the first volume is out in January (and in Previews now, so tell your LCS you want it!) 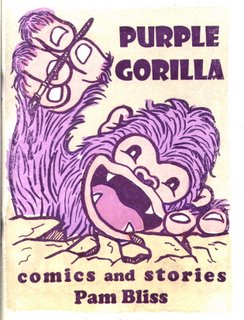 Next is Pam Bliss's Purple Gorilla. This 48-page mini-comic is chock full of fun, including the title story which is printed on purple paper in the middle. Bliss is one of the all-time greats in the mini-comic world, and Purple Gorilla continues the fun that she is known for. If you've never read anything by Pam Bliss, you owe it to yourself to do so immediately. (Her Dog & Pony Show collection is a good place to start.) 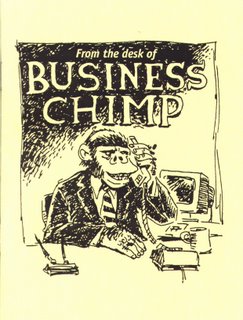 Finally there's From the Desk of Business Chimp, which is actually a tip-in comic by Sean Bieri included with his Jape vol. 2 #1 mini-comic. It's a short series of one-panel gags which are both funny and melancholy, and will be appreciated knowlingly by anyone who has worked in an office. Sean has been doing mini-comics for about fifteen years now, and is another creator with whom you should acquaint yourself.


(standard disclaimer about gorillas & chimps not really being monkeys applies)


Okay, that wraps things up for today. I'll be back tomorrow with more of my finds from the first ever SNAP!