Steve Lieber is not only known for being a great cartoonist and a fine gentleman, but also for his highly entertaining convention write-ups.

Steve has now posted on the Mercury Studios blog a summary of the trip that he and Sara Ryan took to the Salón Internacional Del Comic Del Principado De Asturias in Gijon, Spain.

Although the text of the write-up is relatively short, Steve makes up for it by including a host of entertaining photos, including this one of toilet paper with manga-inspired packaging: 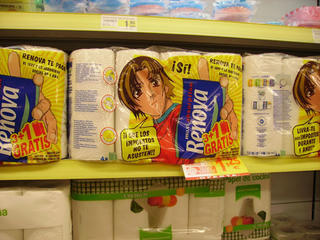 Which inspires us to suggest a new slogan for an up-and-coming U.S. Manga Publisher: