Continuing my look through the February Previews (for comics supposedly shipping in April), here are a dozen indy comics that I feel are worth your attention:

Tron: The Ghost in the Machine #1
(Slave Labor Graphics, $3.50, p. 212)
Another comic springing out of the strange alliance between SLG & Disney, this sequel to the groundbreaking film takes place in teh present day. It'll be interesting to see what changes they make now that 'cyberspace' is something that many more people are actually familiar with, and the computer landscape has changed so much.

Horrorwood #1 (0f 4)
(Ape Entertainment, $3.50, p. 218)
It's a mystery set against the backdrop of Hollywood, and I find the art attractive, so I'll probably give Brandon Terrell & Brent Schoonover's new comic a try.

Mouse Guard #2
(Archaia Studios, $3.50, p. 220)
I've read the original black and white version of the first issue of Mouse Guard, and it's intrigued me enough that I'll be giving this color series a go.

Warren Ellis' Wolfskin #1 (0f 3)
(Avatar Press, $3.99, p. 229)
Surely it won't be at the level of Nextwave or ay of Ellis's other major works, but with full-color art from Juan Jose Ryp this barbarian tale is bound to be full of plenty of good-looking senseless violence.

Cthulhu Tales #1
(Boom! Studios, $6.99, p. 240)
Six new comic book tales based on Lovecraft's Cthulu mythos. While I prefer the tales presented in their original style, the mythos have shown to be easily adapted into other types of stories too, so no matter what the take is here I imagine it'll be enjoyable. 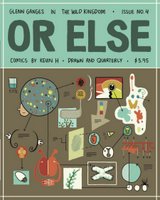 Or Else #4
(Drawn & Quarterly, $5.95, p. 275)
Or Else #2 was quite possibly the best single issue of last year, and by now you've surely read all the praise that's been heaped on Huizenga's recent Ganges. If you're already on board, this is a no-brainer. If not, well, this'll give you the perfect opportunity to see what all the fuss is about.

Action Philosphers: Hate the French!
(Evil Twin Comics, $2.95, p. 278)
Fred Van Lente & Ryan Dunlavey take the Larry Gonick approach to make comics that are both irreverant and informative, showing that educational comics can also be a lot of fun.

Dorothy #7
(Illusive Arts, $5.00, p. 294)
This photocomic for the 21st century continues the intriguing modern take on the Wizard of Oz.

Buckaroo Bonzai #1 (of 3)
(Moonstone, $3.50, p. 298)
Adapting the never-produced tv pilot script into comic book form, this is the return of the great 80's cult hero. (It's in full color, which I think will improve the B&W art from the preview issue.)

Monkey vs. Lemur: Crisis with Infinite Critters #1
(Silent Devil, $3.95, p. 310)
Assuming this extra-sized issue equals the madcap wanton combat of the first special, it should be a lot of fun. I just wish that the monkey wasn't the 'bad guy'.

The Middleman volume 2 #4
(Viper Comics, $2.95, p. 353)
While most tv writers who slum in comics turn to the mainstream publishers, Javier Grillo-Marxuach has taken the road less travelled and teamed up with Les McClaine to produce a creator-owned story of secret agents protecting us from the unexplainable.


That wraps up my look at indy comics. A couple of days ago I highlighted mainstream comics, and ina few days I'll put up my Collections/GNs picks.