Someone Else Has Probably Already Made This Observation 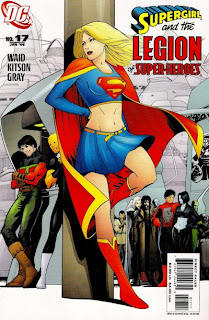 So in looking at the two-page spread of the new Fortress of Solitude in last week's Action Comics Annual #10, I noticed that there are statues of the old (pre-Crisis/ZH/Reboot) Legion of Super-Heroes in there, not the current LoSH.

Which led me to a realization: The current Supergirl and The Legion of Super-Heroes comic is probably set not in the future of 'New Earth' (i.e. the current DCU), but rather in the future of the 'New Parallel Earth' (or whatever they end up calling it) that is being hinted at.

This would explain why the Supergirl in SatLoSH is different than the one appearing in the modern day DCU. I also seem to recall some multiversing going on in the final issue of the old Legion when the new LoSH was introduced.
Posted by Dave Carter at 11:57 AM

I was wondering about that two page spread when I first saw it. Thought it was odd, but yeah, I can see this explanation working as well as any other.

I was told at my comic shop that Mark Waid had confirmed at some point that this LOSH was officially the first "One Year Later" title, and was set in that status quo from it's very first issue.