Yes, Previews-o-Rama is back, at least for this month. We'll see how it goes...

Hellboy: Makoma is a two-part flashback mini telling a story of the big red horned one in Africa. It's written by Mignola with art by Richard Corben. The preview page looks pretty good.

The chronological Concrete collection continue with the fourth volume: Killer Smile, collecting the titular mini plus a bunch of short stories.

The Territory is a hardcover OGN by Jaimie Delano and David Lloyd. The description summary given doesn't do much for me, but that creative team makes it worth a consideration, as Lloyd doesn't seem to do much comic work these days.

Okay, who the heck asked for a Scarface prequel novel? And wtf is Dark Horse doing publishing this?

Okay now, let's talk Crying Freeman: writer Kazuo Koike wrote Lone Wolf & Cub, one of the best manga series ever; and artist Ryoichi Ikegami is a fantastic artist. Yet I'm telling you to stay away from this series. Why? It starts rather strong, focusing on the titular reluctant assassin; but as it continues, it gets more and more violent and misogynistic. I was reading this when Viz published it many years ago, and its one of the few comics I ever stopped buying because it became too offensive. It's quite a shame, actually. If you need an Ikegami fix, hunt down the out-of-print editions of Sanctuary or, even better, Mai, the Psychic Girl (and hope that Viz sees fit to release those again at some point).

There are a couple more Harlequin Manga as well: Idol Dreams in the pink (all ages) line, and Holding On to Alex in the purple (smutty) line. I know they're probably targeting the February Valentine's Day crowd, but wouldn't it make more sense to space out the releases on these rather than putting two out in the same month?

Fans of horror manga will no doubt be happy to see Octopus Girl and School Zone.

The post-movie Star Wars titles kick off with a 25 cent flip-book issue.

Oh, I'm loving the half-page The Goon strips that Eric Powell is providing in the Previews listings--hopefully they'll be collecte dup at some point.

Paul Pope on Batman: Year One Hundred looks cool (and will probably look just as cool in the inevitable trade collection later in the year).

Hey look: Cliff Chiang is drawing Detective Comics! I suppose it's too much to ask that he'll be sticking around as the regular artists after the OYG (One Year Gap).

Batman: Legends of the Dark Knight hits the magic 200th issue. Eddie Campbell writes, and Bart Sears does the art--depending on which Bart Sears shows up, this could be good, or could be an eyesore.

The unnecessary Batman: Gotham Knights finally comes to an end.

Alas, so does the wonderful Gotham Knights, which just goes to show that a major publisher can have a quality, critically acclaimed title and have it still not make it in today's market (see also: Plastic Man).

Superman, Action Comics and Adventures of Superman give us a three-part overview of the history of the Earth-2 Superman, by Joe Kelly, Ed Benes & Dan Jurgens.

Jonah Hex! Sgt. Rock! And now Warlord!--the 70s are back in a big way at DC. It looks like Bart Sears is using his good art for this book, so it may be worth picking up.

Dude, that's Dawnstar, Blok & Tyroc on the cover of Legion of Super-Heroes #15! If they'd pring back Quislet, Polar Boy, & Tellus my life would be happy (at least for the 15 minutes it would take to read the thing).

Wonder Woman also come to an end (at least until she is rebooted after the OYG)--wouldn't be a Crisis without a Wonder Woman cancelation, would it?

Speaking of Crisis, there's plenty to go around this month, including Superman vs. Superman in Infinity Crisis #5. Look, you know whether or not you're getting this; nothing I say one way or the other will change you mind, will it?

If you're looking for some good, accessible Superman stories, you can't go wrong with the two Superman Adventures digest-sozed collections.

Golly, but all of a sudden CMX seem to be publishing a ton of manga. They're not quite at the TokyoPop or Viz level yet, but they're getting there. Too bad none of it interests me.

John Ridley's Those Who Walk in Darkness was a darn good super-hero novel, so I'll give his new mini-series, The American Way a try.

Hey look: Planetary! Which comic do you think will fall behind first: The irregular Planetary or the suppsoedly bi-monthly Astonishing X-Men?

Along with his Solo issue, Howard Chaykin's City of Tomorrow was one of his strongest efforts in a long time. Hopefully it'll find the audience it deserves in the trade collection.

Those of you late on the Grant Morrison bandwagon will want to check out the Kid Eternity collection.

Bendis's Sam and Twitch finally get a propper trade collection. it was actually pretty good stuff, if I rememebr correctly.

I suppose if I were a big Belle & Sebastian fan I'd be totally stoked about Put the Book Back on the Shelf, an anthology of adaptatios of B&S songs into comics form. I'm not, but maybe you are?

I am, however, toally stoked to see that Jimmie Robinson has a new mini: Bomb Queen. This from the man who brought us the underrated CyberZone, Amanda & Gunn and Evil & Malice.

Hey wait; there was a zero issue of Rocketo? I missed it. It's not worth it to me to buy the whoel colelction just for that, but if you missed this series when it was at Speakeasy, you have a second change to get yourself some slow-moving but pretty pretty comix.

If you're not buying and enjoying Fell or Gødland, there may be something wrong with you; see your family doctor soon!

For no good reason, Ultimate Thor steps off the cover of a romance novel and onto the cover of Ultimate Fantastic Four #27, where he hovers myseriously and gigantically over the White House. Note the complete lack of any mention of Thor in he solicitation copy.

Yeah yeah, Astonishing X-Men is back. Supposedly bi-monthly. Figure in the inevitable delays, and I figure you'll be able to buy the trade collection sometime in mid-2007...

Sean McKeever and Takeshi Miyazawa deserve your money, so you are buying Spider-Man Loves Mary Jane, right? Right? Look, if you don't spend it on this comic, that big bully is just going to beat your lunch money out of you anyway, so you may as well get a good comic out of it.

Ed Brumaker and Michael Lark take over Daredevil--this better be worth losing Gotham Central over, is all I'm saying.

Why oh why do Marvel insist on publishing things like Ares, Doc Sampson, New Mangaverse, Sable & Fortune, and Underworld?--C-list characters by 2nd-tier creative teams that will get no promotion support to speak of? They may be perfectly good comics--heck, one or two of them may even be great--but does Marvel expect these things to sell themselves?

Can I just say how damn happy I am that Peter Milligan is writing an X-Statix mini? Oh, I'm sure it'll sell for crap (see the previous paragraph) but I don't care. I'll be reading it (along with three or four of you other people), and that's enough. 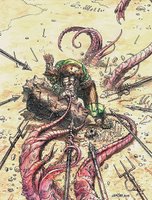 Y'know, if Ladronn were doing the interiors of Incredible Hulk, and not just the covers, I'd be tempted to read it again.

Funniest solicitation of the month: The Secret War hardcover collection. Nothing intrinsically funny about the solicit; just the humorously misplaced optimism that issue #5 will come out in time to be collection.

Essential Moon Knight! I missed this stuff the first time around, so I'm happy to see this affordable collection come down the pipe.

Just in case you missed any of it when it came out in comics form, Marvel are dumping ever single House of M story into a collection this month. Cause nothing says oversaturation like eight trade paperbacks.


Whew--I forgot how much work this is! Part 2, the middle, will be along at some point in the near future...
Posted by Dave Carter at 10:14 PM