Continuing my long-delayed look at the things I picked up at SNAP! last month. This time out I'm focusing on the various anthologies. Of course, as with many anthologies, there's a wide range of styles and subject matter covered in these, and chances are that not all stories in each of these will be to all tastes. But that's one of the thigns that makes comics so great--the variety. Right? 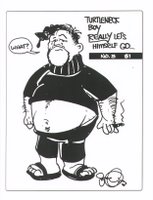 Turtleneck Boy is the brainchild of mini-comics creator Suzanne Baumann. She created the blank slate character, and invites other creators to contribute stories about him. I picked up #5, which includes a four-page a Pam Bliss story, and a cover by Paul Sizer.

Yes, you're seeing that right, the price on Pop Art Funnies #3 is just 15 cents for a full-sized 32-page comic (black & white with color cover). It's the project of Martin Hirchak, who draws the lead story in each issue (and sometimes other stories too) and then gets area cartoonists (like Sean Bieri & Matt Feazell, among others) to contribute shorter stories to fill out the book. Issue #4 was 25 cents, and issue #5 was 50 cents. But even at that rate of increase it'll still be a bargain for a while.

At $6.95 Potlach Project #4 is more expensive, but it's also 108 black and white pages on sturdy paper stock, so it's a good deal too. It's from Angry Dog Press, a Maryland outfit, so presumably most of the artists here aren't local to Michigan, but there's still some interesting stuff to be found here.

The most interesting anthology has to be Empty Pockets from The Wooden Book Press. All of the contributors to this 250-page black & white anthology were students in Phoebe Gloeckner's narrative art courses from Fall 2004 & Winter 2005. Not only are these stories the first published work for these artists, for many it's the first comic work that they've ever done. Tastes will vary of course, and some stories are stronger than others, but it's on the whole impressive. At $19.95 it's not cheap, but worth it I think for a peek into what just might be the next generation of cartoonists.