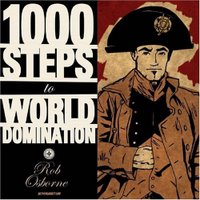 1000 Steps to World Domination is not an easy comic to describe. It's kind of a semi-autobiographical story about the trials and tribulations of a freelance artist. But there are aliens. And a talking monkey. And a tortoise and hare. And of course there's a long-suffering wife (isn't there always in stories about artists?)

Through it all, Rob--the artist in question--ruminates on taking over the world through cartooning. This sounds ridiculous on the face of it, but it does have the novelty of having never been tried before. (I myself have at various times been involved in no less than two world domination plans. One never went beyond high school graduation, but the other is still ongoing, so I shant speak of it here...)

But it's not really a story at all. It's more of a series of loosely connected vignettes--some fanciful, others down to earth. I hesitate to call it stream-of-consciousness, because it's not really that at all, although it sometimes feels like it is. Most of the vingettes are just a page long, and there's rarely an actual connection from one to the next. But they somehow make sense, and despite the lack of obvious flow between them, it all flows together nonetheless.

At 136 pages, it seems to be just about the right length; Osborne wisely cuts things off before they become too cute or cloying. It all makes for an interesting and entertaining read.